The other day I was having lunch with my mother at La Place, which is a chain of buffet type restaurants in the Netherlands. Their food is usually pretty good — albeit a bit too expensive for a poor little student like yours truly — but La Place doesn’t exactly scream “passion for food”.

Anyway, I chose a banana and orange smoothie, which was delicious, and a piece of what was called “Grandmother’s Apple Pie”, which turned out to be quite disappointing. I used to think you could hardly go wrong with an apple pie, but then I realised what every apple pie needs, and what this one lacked, is a little bit of soul.

(Great, now I’ve got this Bon Jovi song stuck in my head)

You see, the thing with apple pie is that, for me at least, it’s a typical family pie. In my family, when someone’s having a birthday (aunts, uncles, cousins etc.) there’s a home made apple pie present, whether it’s made by me, my mother, one of my aunts… It doesn’t matter — it’s there. So, for me, apple pie represents family, cosiness and love.

I guess I shouldn’t have been that surprised when the apple pie from an unpersonal and overpriced restaurant chain didn’t live up to my standards, then… (Although, the Swedish apple pie you can get in the IKEA restaurant is delicious, so my theory isn’t entirely foolproof.)

Not only did this pie lack some soul, there were a few other things I missed as well. A classic Dutch apple pie includes cinnamon (which this pie actually did), but it’s also quite common to add raisins and lemon juice — which were not used here, and this resulted in it tasting a bit dull.

So, after encountering the Soulless Apple Pie I not only wanted to talk about apple pie (and any baked goods, really) requiring a bit of soul for it to be truly awesome, I also wanted to share my recipe for a decent Dutch apple pie, because this pie is a classic (seriously, it’s served on pretty much every Dutch street corner), and should be made right! 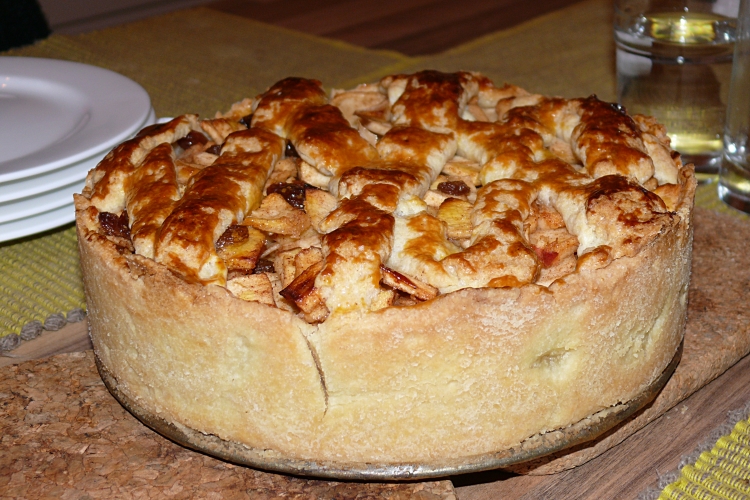 You’ll need… For the pastry:

– a pinch of salt

1. Prepare the pastry We start with preparing the crust of the pie, by mixing the flour, the sugar and the salt together in a bowl. Next up is adding the butter cubes and the egg to the mix and making a nice dough of it. I did the mixing with my hands, which is probably the easiest way since the butter is cold and therefore difficult to mix with the help of a whisk or any other mixing tool.

2. Let the pastry rest in the fridge Now you’ve mixed all of the ingredients together, form your mixture into a nice ball, wrap it in some plastic foil and lay it to rest in the refridgerator for about 30 minutes.

3. Prepare the filling While the dough is resting, it’s time to make the filling! Here’s the tedious little bit: you need to peel and core all the apples and cut them into slices. It doesn’t really matter how big the slices are — basically do whatever you prefer, it’s your pie after all!

So, once you’ve peeled and sliced all the apples, add the lemon juice to the mix. Not only does this add an extra (awesome) layer to the taste, it also makes sure the apples don’t turn a bit brown while they’re waiting to be put in the oven with the rest of the pie.

Next up, add the raisins, sugar and cinnamon. Oh, and the amaretto if you’ve decided to put that in (again: it’s really good). You need to mix everything through — I did it with my hands again, since it was easiest, but if you don’t want to get those dirty (because this is one sticky mess, I can tell you) you can use a spoon, too.

Tip! If you don’t feel like making an entire cake (or don’t have an oven at your disposal) but you do really crave the taste of a delicious apple pie: just make the filling, and leave the crust be! It’s delicious all on its own as well!

5. Roll out the pastry and put it in the tin When the 30 minutes are over, take the ball of pastry out of the fridge. Don’t worry, it’s okay if it’s been in there a while longer. What you need to do now is take about one third of the pastry and put it to the side for now. Roll out the remaining two thirds of the pastry with a rolling pin on a surface you’ve first dusted with flour (so the pastry won’t stick — make sure you use enough flour!). It’s important to make sure your rolled out pastry is quite thin, since it needs to cover the entire tin. Apparently, the crust for Dutch apple pies is much thinner than those of American ones (I’ve never had an American apple pie, but that’s what I read on the interwebz).

Once you’ve rolled the pastry out wide enough so it will fit the entire tin, put a bit of flour on the pastry, and gingerly roll it around your rolling pin. Then roll it out again over your tin, and firmly press it down so that the pastry covers the bottom and sides of the tin completely.

6. Add the almond paste Remember the 150 g of almond paste from the ingredients list? No? I almost forgot about it, too, just now, but this is the moment to use it. Crumble the paste and divide it over the bottom of the tin.

7. Add the filling Now it’s time to add the filling to the tin. Don’t just pour everything in, because you don’t want all the leftover liquid to go into the tin with the filling. Make sure the tin is filled to the brim, and just press the filling down a bit to make room for more.

8. Make lattice topping out of remaining pastry So, all that’s left now is the remainder of the pastry you put to the side earlier, and one egg yolk. Use the pastry to form a lattice by arranging it in strips on top of the filling, diagonally. Now brush the lattice with the egg yolk — this will ensure the top gets a nice golden brown colour while baking.

9. Bake the pie! The only thing left to do now is to put the tin into the oven (preheated at 180 °C) and bake it for about an hour. I baked mine for precisely 60 minutes, but it probably depends on your oven when the pie is exactly done. If the pie starts leaking a bit while it’s in the oven — don’t panic, it’s not ruined. That’s just because of the juice of the apples. It’ll still be delicious! Maybe even more so!

Once the pie is done, take it out of the oven, and let it cool for a little bit. It tastes best while it’s still warm, though, so gather round your friends and/or family and enjoy your home made Classic Dutch Apple Pie with a little bit of soul!

I’m curious to hear/read other people’s stories about apple pie, so, please, share your experiences and memories down below in the comments! Do you have a family tradition of apple pie? Have you ever had the Dutch version? And, if you’ve tried my recipe, how did it turn out?