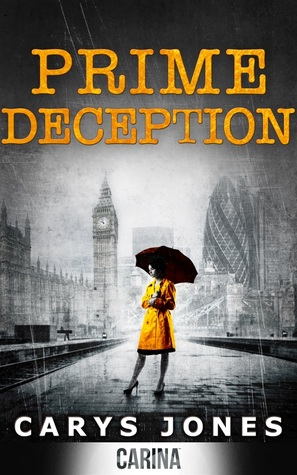 John Quinn, an investigative journalist on England’s biggest-selling and most notorious tabloid newspaper, is about to write the story of his life — a scandalous exposé of one of the country’s most powerful men. But the story dies when Lorna Thomas, the kiss in his kiss-and-tell, kills herself on a quiet country road.

For six months Laurie Thomas’ twin sister had been the Deputy Prime Minister’s secret mistress — and following [her] sister’s footsteps to London, and to the heart of the government, Laurie grows more convinced that Lorna did not take her own life.

But if Lorna didn’t kill herself, who did? There’s only one person who can help Laurie — the very man who’s bed her sister had illicitly been sharing.

Disclaimer: I received this novel from the author to read and review. This has not influenced this review in any way, as I will always give my honest opinion of any book I read.

I went into reading Prime Deception completely unbiased, as I hadn’t read anything about it yet. The blurb sounded a bit dramatic and sensational, but I figured that wasn’t much to go by since blurbs are rarely representative of the novel they are trying to sell.

Unfortunately, I didn’t like this novel. I was hoping for an exciting and suspenseful crime novel, but this didn’t get exciting until the final 30 pages (of 199), when a strange climax ended the story very abruptly.

It’s hard to give a good review without giving too much away of the plot, but suffice it to say that this isn’t really a crime novel (except for those last pages). The majority of this story consists of the Deputy Prime Minister being heartbroken by the loss of his former mistress, and of Laurie mourning her sister and repeating that she couldn’t have killed herself. It left me feeling like I was reading the same thing over and over again, without there being any progress to the story. This resulted in me not being able to connect with any of the characters, since they didn’t really grow and felt like flat characters to me.

Besides that, very few characters were actually likeable. Especially Charles, the Deputy Prime Minister, really managed to get on my nerves through his irresponsible and, frankly, quite stupid and infuriating behaviour. Let’s just say the ick factor was quite high at times, and his role as Deputy Prime Minister wasn’t always quite believable either. I still don’t know what exactly his responsibility is within the government, as the author made it seem as if he was the country’s leader. Where does that leave the actual Prime Minister then?

While the story and the characters didn’t do too much for me, I did enjoy Jones’ writing style. She certainly has a way with words, which was what made the novel readable to me.

What wasn’t acceptable, however, and what made me give this novel only 1 star instead of the 2 I was going for at first (on Goodreads) was the huge amount of spelling errors. This novel is riddled with typos, forgotten words (such as the “her” in the blurb — see above) and general spelling mistakes. The one thing that really pissed me off and that was more or less the last straw for me, was the fact that at one point the novel mentions Laurie’s name when it clearly means Lorna (the dead sister):

Ever since he had received the call stating that Laurie had died, something felt odd.

That’s just… I don’t even have words for it. This book definitely needed another look from an editor before being published.

I think Prime Deception had the potential of being a really enjoyable novel, but right now I’m sad to say that wasn’t the case for me.

One thought on “Prime Deception by Carys Jones”