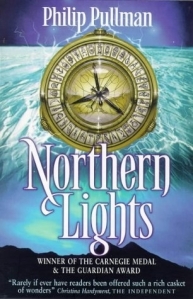 Twelve-year-old Lyra Belacqua lives unparented and half-wild among the scholars of Jordan College. One day her uncle, Lord Asriel, an experimental theologian and explorer, arrives with terrifying news from the north. Impelled at first by her own curiosity, but soon pursued by appalling dangers, Lyra is drawn into a savage struggle among the armoured bears and witch-clans of the Arctic, where a scientific research station is carrying out experiments too horrible to speak about.

In order to survive at all, she must leave her childhood behind and venture where no one has gone before – beyond the Northern Lights.

Confusingly, this novel, which is the first one in Philip Pullman’s His Dark Materials trilogy, has two names: in the United Kingdom it’s called Northern Lights, while in the United States and some other countries it’s called The Golden Compass. I’ve read the novel as Northern Lights, and this is also the name Philip Pullman gave the book, so that’s the name I’m sticking with!

I had to read this novel for one of my courses, and hadn’t really heard about it before that. Apparently, it’s a very well-known trilogy (shame on me) and I can see why! I loved Northern Lights, and really want to read the rest of the trilogy as well. I’ve been ogling a gorgeous box set on the Book Depository, but my bank account won’t allow me to buy it for a while yet, I’m afraid…

The thing I loved most about this novel is that so much happens in it, and it’s basically climax after climax. You’re thrown right into the action immediately upon starting the novel, and the pace rarely slows down. Lyra’s life inside the college is alread quite filled with action, and I was content just reading about everything that happens to her and her friends there, but then the mystery and intrigue starts and it becomes even more fascinating.

Pullman is very good at providing tiny snippets of the overarching story at just the right moments to reel you in again. Lyra has no idea what is going on in her world, and what her role is. All she knows is that she’s been given a golden “compass”, which is called an alethiometer, and that she’s the only one who’s able to read it. Besides that, she knows her friend is in danger, as is her Uncle Asriel, and that’s enough for her to want to go up to the north and find them. In the meantime, the reader is aware that her role is much bigger, but knows nothing more about what that role is exactly, which was a brilliant way to keep me captivated.

Lyra is a hugely interesting protagonist as well. She’s very young, and that’s noticeable throughout the story, but not in a bad way. She’s stubborn and wild and will not stop fighting until she has what she wants. Oh, and she lies. A lot. I kind of loved that about her. She’s just a very fierce twelve-year-old and the perfect narrator for this story. Her daemon, Pantalaimon, is amazing as well. The whole daemon thing was fascinating in itself, too; a person’s daemon is their soul personified in an animal that goes with them wherever they go, more or less. I loved the little moments between Lyra and Pantalaimon, and how much they love each other

The other characters are very interesting too. Some of them are absolutely horrible (such as Mrs Coulter), but others were lovely and I started to really care for most of them, which doesn’t always happen to me. It made me want to keep reading on and on and onto the next book.

The thing that interested me most of all, however,  was the idea of Dust, and how afraid of it everyone seems to be. It’s this mysterious power, and after this first book I still know hardly anything about it, except that the Church thinks it is evil and it should be eradicated. I am fascinated by this, and by the social commentary Pullman provides with it. I am really looking forward to finding out more about it in the rest of the trilogy.

I’d recommend Northern Lights to anyone who likes a good (YA) fantasy novel. It’s really extraordinary, and I honestly have to say that I have never read anything like it. It’s definitely one of a kind!

6 thoughts on “Northern Lights (The Golden Compass) by Philip Pullman”