June 1957. One hot afternoon, in a backwater town in the American South, a young black farmer named Tucker Caliban throws salt on his field, shoots his horse and livestock, sets fire to his house and departs the state. And thereafter, the entire African-American population leave with him.

The reaction to this mass exodus comes from the white townsfolk who remain. Every one of whom – whether male or female, young or old, liberal or conservative, bigoted or sympathetic – is grappling with, and attempting to explain, this spontaneous rejection of subordination. 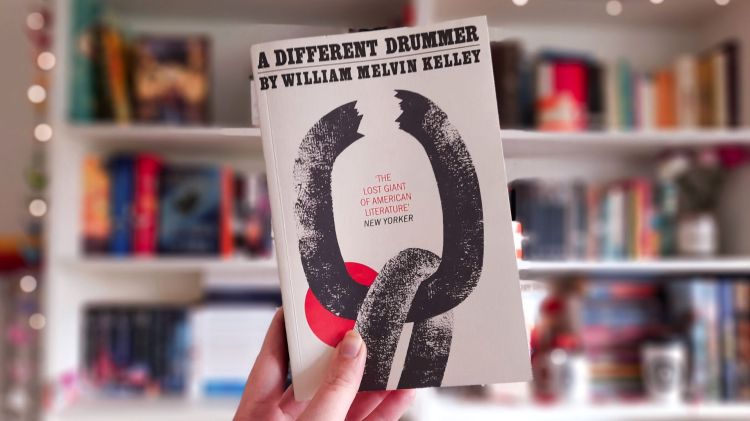 My father was the first one in my family to read A Different Drummer. He did so about a year ago, and since then he’d mentioned it on a few separate occasions, telling me how much he’d loved it. I was never really planning on reading it – and wasn’t very sure what it was about either – until I decided to let my friends and family pick the books I should read in May, and my father told me to read this book. I’m so very glad he did, because this is one of the best books I have ever read.

A Different Drummer, William Melvin Kelley’s debut novel, was a success when it first came out, earning him comparisons to James Baldwin and William Faulkner. He published a few more novels after that, but for some reason, people stopped wanting to read and publish him. Perhaps he was too political for their tastes, or too unapologetic, because it couldn’t have been his writing itself. Kelley’s writing style and storytelling abilities are phenomenal and while reading A Different Drummer, I couldn’t shake the feeling that I was reading something very important and very, very good.

This is a novel about black people, through the perspectives of white people, written by a black author. Kelley was political in his writing and A Different Drummer is also very clearly about segregation, inequality, racism, and the black experience. And yet it’s completely different from any other book I’ve read about this topic. This story is a story of many different levels: it’s the story of the individual characters whose perspectives and life stories we get to see in the book, it’s the story of Sutton, this small town where the escalating events take place, but it’s also a much bigger story that transcends spatial and temporal borders: it takes on almost epic and mythical proportions. All while being stylistically brilliant as well.

The story is told in about ten chapters, each one providing us with a new narrator, and with that new perspective, new pieces of this mysterious puzzle of the exodus of the entire black population out of this fictional state in between Alabama and Mississippi. We learn more about the racial relations within this small town, and about a few specific black characters, like Tucker Caliban and his wife Bethrah. You never get a complete picture of the town and its inhabitants, though. Tucker Caliban, for example, remains a bit of a mystery, which I think can be explained by the fact that none of the white narrators truly knew or – more importantly – cared to know him. They had their prejudices about him and didn’t bother getting to know the man behind the quiet and stern exterior.

What I loved about the cast of characters in this novel was that all of them feel exceptionally real. They are all flawed, some of them up to the point of being awful people, and they are all very human. I sympathised with some of them while shaking my head at them at the same time, got angry at a few others, and was drawn in by them all. Kelley never relies on stereotypes in his depiction of these white characters, and I was impressed by how he manages to establish such a well-rounded and real character in only one chapter, before moving on to the next and doing the same thing again, always in a refreshing way.

A Different Drummer was actually republished a few years ago after journalist Kathryn Schulz wrote an amazing article on William Melvin Kelley in the New Yorker. She happened upon his work by chance and discovered what she called ‘the lost giant of American literature’. With her article, she managed to bring Kelley back in the limelight. There’s one sentence in her article that perfectly captures the novel:

Although his story has the emotional proportions of a myth, his sentences reliably feel like real life.

The tale of the entire black population one day deciding that enough is enough and leaving the state should be one that is too enormous to grasp. But through his narration, Kelley makes it small, bite-size. He tells a huge story in such a way that it becomes easy to understand and to be drawn in by. The themes in A Different Drummer are big, important and tough, but Kelley turns it into a story that you don’t want to look away from because it is entirely captivating and written in the most evocative, beautiful way. If there’s only one book I could recommend to anyone this year, it would be this one.

12 thoughts on “A Different Drummer: the Best Book You’ll Read All Year”