France, 1714: in a moment of desperation, a young woman makes a Faustian bargain to live forever – and is cursed to be forgotten by everyone she meets.

Thus begins the extraordinary life of Addie LaRue, and a dazzling adventure that will play out across centuries and continents, across history and art, as a young woman learns how far she will go to leave her mark on the world.

But everything changes when, after nearly 300 years, Addie stumbles across a young man in a hidden bookstore, and he remembers her name. 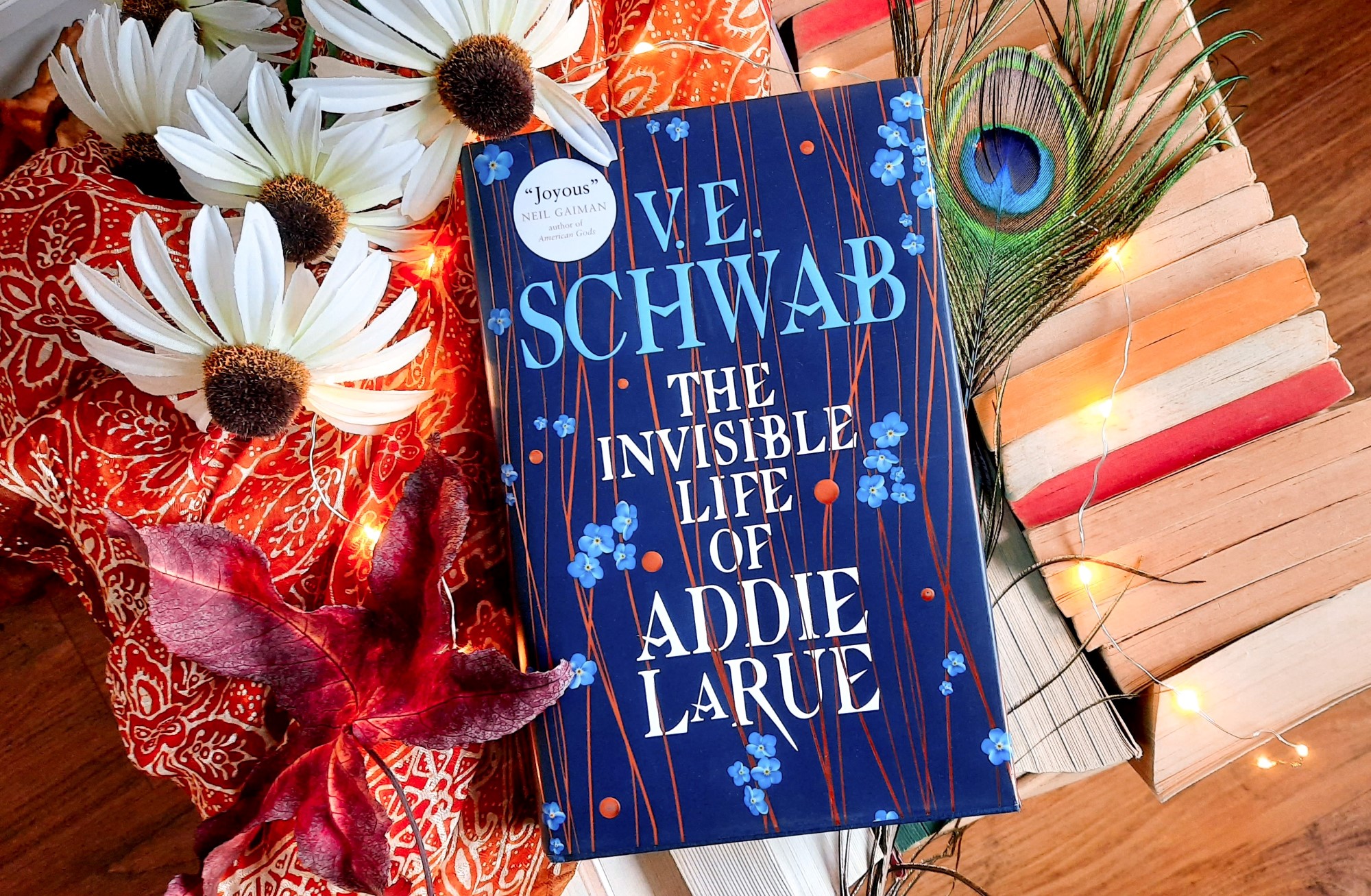 The Invisible Life of Addie LaRue was my most anticipated release of 2020, as I’m sure was the case for many others in the book blogging community. Anyone who’s been following V.E. Schwab on social media will probably know that this novel is particularly special to her and that she’d been working on it (actively or not) for many years. That knowledge already made it feel a little bit more special to me, too, even before I started reading the book. Luckily, it didn’t disappoint in the slightest: this novel is a absolutely marvelous and one of the most relatable stories I’ve ever read – even though it’s about a girl who can live forever.

Addie’s story is a long one, as it spans three centuries. We jump between her ‘now’, which is 2014 New York, and her past, nearly always the 29th of July, but throughout different years, decades and centuries. In 1714, Addie LaRue is about to marry a man she isn’t in love with. She’s terrified of the life before her – to live and die in the same small village – because she wants to see the world and truly live. In a last-ditch effort, she prays to the gods, and a dark one answers. He makes her a deal, but the deal comes with conditions she hadn’t anticipated. Addie LaRue cannot die and does not age, but she also won’t be remembered by anyone who meets her as soon as she leaves their sight. She is finally free, but at what cost?

Throughout the decades, we see how Addie thrives and suffers, and changes through all of it. The question that keeps rising to the surface is: is a life without a single relationship (either platonic or romantic) really worth living? Addie is unable to make even a single friend. She can spend one day with someone, but that’s it. It was heartbreaking to read about her ‘relationships’ with people; how for her it can be a love affair that’s been going for three months, while for the other person, it’s three months’ worth of first nights together, without remembering a single one. Schwab describes the loneliness and sadness of such a situation heartwrenchingly well. But then there are the wonderful moments – for example when Addie sees the sea for the first time – and there’s so much beauty in those, too. Addie has to navigate the life she accidentally chose for herself and it’s so interesting to follow her doing so as she learns more about the limits of her ‘curse’.

And then, in 2014, when she’s already been around for 300 years, she meets someone who remembers her: Henry. I knew this was going to happen (it’s part of the premise of the book, after all), but I still almost physically felt the shock Addie experienced while I was reading the scene in question. She’s been alone for so long and here is someone who doesn’t forget her. I loved this part of her story and everything that came after it. I’m not going to say anything about the how or the why because I don’t want to spoil anything, but I think it was perfectly done.

Ultimately, The Invisible Life of Addie LaRue is a very sad story. Both Addie and Henry have experienced tremendous sadness in their lives and a lot of that was caused by some kind of existential dread. Henry, especially, is constantly aware of time running out, and I could relate to that on a visceral level. I felt Henry’s panic and I also understood his fear of not being enough.

The one thing that stuck with me the most after finishing this novel is how it told such a universal story while also telling Addie’s specific story so very well. It feels like this is a story of opposites: its scope feels both enormous and very small, and it feels like a story that’s about profound sadness and despair but also about joy and hope. Many stories are, of course, but I feel as if Addie LaRue balances these emotions especially well. I enjoyed the time the novel took to explore these big themes. I also liked that it kept me on my toes: Schwab drops little hints about aspects of Addie or Henry’s pasts that the reader does not know about yet and it made sure I remained intrigued throughout the entire 540-page book.

In the end, The Invisible Life of Addie LaRue was pretty much a perfect story to me. I loved the characters, I adored the writing and the structure in which the story is told, and I could feel how much heart and soul V.E. Schwab put into it as I was reading it. This is definitely one of those stories that I’ll keep thinking about a lot, I think. It really touched me and I’m glad that Addie is getting so much attention and love.

4 thoughts on “The Invisible Life of Addie LaRue: a Story for the Ages”