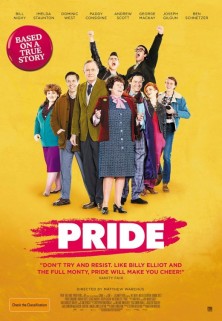 So… Another post about a film. This one isn’t related to books, or to baking, but I wanted to write a post about it nevertheless, because Pride is one of the best and most important films I’ve seen in years.

It’s 1984, and the miner strikes are in full swing in the UK. A group of gay rights activists decides to start a campaign to support the miners out of solidarity, from one oppressed minority group to another. They call themselves Lesbians and Gays Support the Miners, and try to raise money for the miners and their families. It proves to be difficult to find a community willing to take money from a group of gay people, however. Eventually they find a village in Wales where people are somewhat eager to accept their help. The group travels to the village (in an awesome minivan, I might add) and there they start to bond with the miners and their families after they help them out. It’s a slow process and not without its difficulties, but it’s really beautiful to watch how the groups grow closer despite their initial prejudices (mainly from the miners’ side).

I don’t really want to say too much more about the plot. You’ll just have to go and watch it yourself!

And really, you should. This film is based on a true story and that makes it even more extraordinary and even more amazing to watch. To realise that this magical pact and friendship was actually formed leaves you with a wonderful feeling.

There are both incredibly hilarious and heartwarming moments and extremely frustrating and sad ones, and those together make this film so important and so good. It shows how far we’ve come when it comes to gay rights and acceptance, although I realise that the Netherlands is quite a bit more advanced in its developments than some other countries, and here too we’re still not fully there yet.

I watched this in the cinema with three of my best friends, and at one point we all sat crying our eyes out. That’s the effect this film has on you; one moment you’re laughing out loud, and the next the tears are rolling down your cheeks. Especially at the end. Oh boy, the end…

When we left the cinema I felt like I had so many things to say about this film, but now all I really want to say is: go see it. Seriously.