A mysterious island. An abandoned orphanage. A strange collection of peculiar photographs. It all waits to be discovered in Miss Peregrine’s Home for Peculiar Children, an unforgettable novel that mixes fiction and photography in a thrilling reading experience. As our story opens, a horrific family tragedy sets sixteen-year-old Jacob journeying to a remote island off the coast of Wales, where he discovers the crumbling ruins of Miss Peregrine’s Home for Peculiar Children. As Jacob explores its decaying bedrooms and hallways, it becomes clear that miss Peregrine’s children were more than just peculiar. They may have been dangerous. They may have been quarantined on a deserted island for good reason. And somehow – impossible though it seems – they may still be alive. 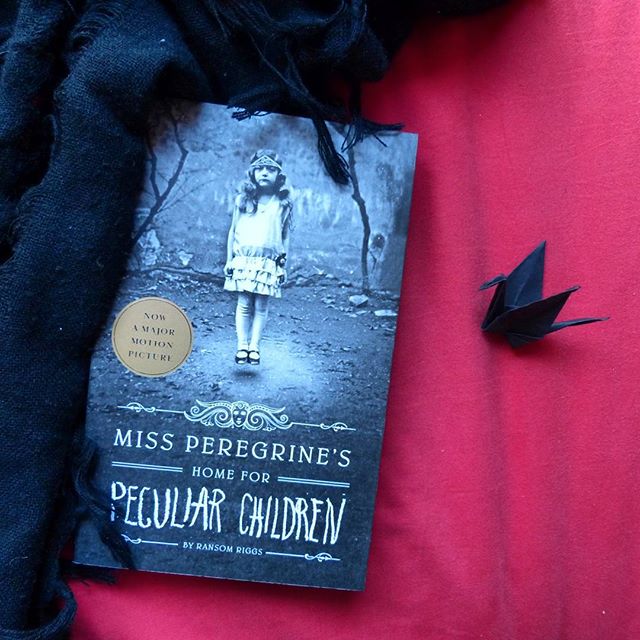 Miss Peregrine’s Home for Peculiar Children is one of those books that’s been on my radar for a very long time, but just didn’t really catch my interest for some reason. I’d heard about it, I’d heard people rave about it, but I never knew the premise of the book, apart from the obvious “home for peculiar children”. When the film came out I thought “maybe I should actually read it before seeing the film”. Skip to now, when I’ve read (and liked!) the book but still haven’t seen the film.

After reading the prologue I was immediately intrigued, mostly by Jacob’s grandfather. Jacob himself isn’t the most interesting character, I think, but his grandfather fascinated me. What I liked most when I first started reading was the writing style, though. I don’t really know how to describe it (can you tell I’m out of the habit of writing book review – because I can). It’s a very easy read in terms of how the prose flows, but it’s also very clever and witty at times. The writing is probably one of the things I loved most about this novel.

Because even though I was intrigued from the start, I thought it took much too long for the story to really get off the ground. I was a bit disappointed that it took so long for Jacob to find out the truth. There’s a huge build up to him finding out, and I thought the story meandered for too long before getting to the point. It’s not that I didn’t like the story up until then, but I wasn’t sold on it until the big reveal, after which the story actually took off and I started to really like it.

I really liked Miss Peregrine and the peculiar children – they were fascinating to me, but I would’ve liked a bit more depth to them and a bit more back story. I was especially intrigued by Miss Peregrine’s peculiarity, or perhaps it’s more of an ability. It’s such a cool concept! I’m guessing these characters and their pasts and personalities will get a bit more ‘air time’ in the sequels, but still – it would’ve been nice to get to know them a bit better straight away.

About those sequels: up until the end of the story this really felt like a stand alone novel to me. I knew from the start it was the first in a series, but I just kept thinking “why?”. Somehow, and I’m not sure for what reason, I’m a bit bummed that this isn’t a stand alone. I mean, the ending was really quite open and there’s room for a lot more story, but… Did it really need that? I don’t know, I think I would’ve liked it better if this one novel went a bit more in depth and left it at that. I’m also not sure yet if I’m going to read the sequels – don’t really feel the urge yet.

One last thing: those pictures! If you don’t know, there are pictures of children with apparently supernatural/weird abilities scattered throughout the book. I think they’re what the novel is most known for, and they’re really cool. I didn’t know they were actually real (yikes!) until a friend of mine told me when I was half way through the book. Made it even more haunting and creepy!