Evie Snow is eighty-two when she quietly passes away in her sleep, surrounded by her children and grandchildren. It’s the way most people wish to leave the world but when Evie reaches the door of her own private heaven, she finds that she’s become her twenty-seven-year-old self and the door won’t open.

Evie’s soul must be light enough to pass through so she needs to get rid of whatever is making her soul heavy. For Evie, this means unburdening herself of the three secrets which have weighed her down for over fifty years, so she must find a way to reveal them before it’s too late. As Evie begins the journey of a lifetime, she learns more about life and love than she ever thought possible, and somehow, some way, she may also find her way back to the only man she ever truly loved… 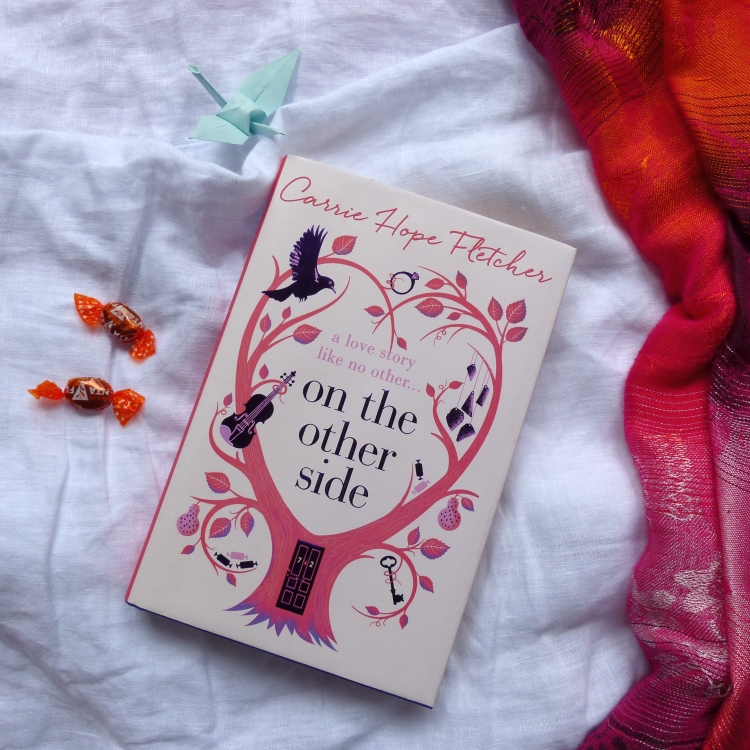 I’ve been watching Carrie Hope Fletcher’s YouTube videos for a couple of years now, so I’ve been familiar with her as a YouTuber long before I became familiar with her as an author. When Carrie explained what her book would be about on her YouTube channel, I became low key curious – it sounded pretty cool! But I was also a little sceptical – would it really be a good novel, or just one of the million mediocre YouTuber books? Earlier this year, I finally got around to reading the book, and decided to read it without keeping the author in mind (“death of the author” and all that). While I do think the book isn’t without its flaws (some bigger than others), On the Other Side was a rather lovely read.

The main thing I really liked about the book was the premise the entire story is based upon. The idea is that everyone goes to their own personal heaven once they die, but only if their heart is light enough – meaning that they don’t have unfinished business. Evie has a past that she’s never been able to let go during her life and that she’s never told her children about. She needs to sort this out before she can go on to her heaven, and she has to go back into the world of the living to do so. I quite liked the way that this was done, because it adds a subtle hint of the supernatural to our own world to create a slightly different one for this story.

While I really liked that aspect, I’m not really sure about how I feel about the magical realism in the story. I really like magical realism, but here it felt a little bit too forced or out of place at times. There are little bits and pieces of magic that come rather out of nowhere and are not connected to anything else in the story. They’re just there, and it felt a bit as if they were needed to help the plot along, but weren’t thought out much further than that. How did they fit in the grander scheme of things? Were there other bits of magic like this in the world? I was left a bit unsatisfied about that.

Although I liked and enjoyed the characters, I would’ve liked them to have been a little bit more complex. The same goes for the plot, really. It was enjoyable, but at times it all felt a little bit too easy, in an “of course that happened” kind of way. It felt too contrived to me, and didn’t flow as naturally as I would’ve liked, partly because of the prose, I think.

In short, the premise of the story was really promising, but I was slightly disappointed with how it panned out. Nevertheless, I thoroughly enjoyed reading this novel. It’s really sweet, and sometimes you simply need a sweet story to make you smile. On the Other Side definitely managed to do that for me.

3 thoughts on “On the Other Side by Carrie Hope Fletcher”