The first day of senior year: everything is about to change. Until this moment, Sal has always been certain of his place with his adoptive gay father and their loving Mexican-American family. But now his own history unexpectedly haunts him, and life-altering events force him and his best friend, Samantha, to confront issues of faith, loss, and grief.

Suddenly, Sal’s throwing punches, questioning everything, and discovering that he no longer knows who he really is–but if Sal’s not who he thought he was, who is he? 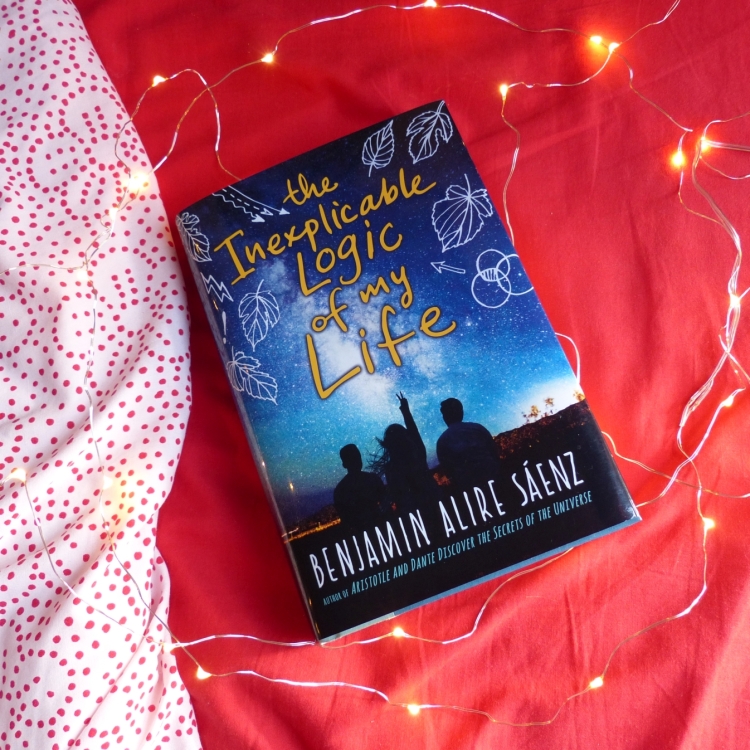 Aristotle and Dante Discover the Secrets of the Universe is my all time favourite YA novel, and probably also up there among my favourite books period. So when The Inexplicable Logic of My Life was announced, I was very excited. I finally read it a couple of weeks ago, and it didn’t disappoint. In fact, it blew me away just as much, if not more, as Ari & Dante. Benjamin Alire Sáenz is a wizard.

Honestly, at first, I wasn’t sure if I was going to connect to this story as much as I did to Ari & Dante, and that was because of the short chapters. Most of the chapters are only a couple of pages, or even one page, long, and at the beginning of the story this made for a bit of a fragmentary reading experience. It was a little all over the place at first, hopping from one detail of Sal’s life or past to the next.

I think that really the main reason why I had my doubts at first is because I was comparing it to Ari & Dante in my mind a lot, but once I let that go and got into the story as it was, it just swept me off my feet. I fell deeply in love with this book. I cried, for crying out loud. I never cry at books. But this got me, man. It got me good.

Sal is a great protagonist. He has this really unique voice that’s both gentle and tough – although he is toughest on himself. The story is basically about his struggle with himself and his identity, and although it’s a small story, plot-wise, it’s absolutely wonderfully executed.

The complexness of Sal’s character was enough to keep the story interesting to me, but then his friends and family are added into the mix and it gets even better. Sal’s father is one of my favourite characters ever. He’s up there with Atticus Finch (not the Go Set a Watchman one) in terms of amazing fathers and simply people, as far as I’m concerned.

One of the things I love about Sáenz’s work is the way he handles family. I’ve written a post on parents in YA novels a while back, and my biggest criticism was that parents, and families in general, are often very absent from YA stories. I love reading about family! It’s an important part of any teenager’s life, whether it’s the “blood” kind or the kind of family you’ve assembled for yourself. The Inexplicable Logic of My Life deals with family, and what it means to be a family, and does so magnificently.

One last thing I should talk about is the prose. It’s perfection – especially in the dialogues. There’s so much raw emotion conveyed through a writing style that’s seemingly effortless and simple. It blew me away. I now officially want to read everything this man has ever written.

I haven’t even talked about Sam or Fito, who are also amazing characters, or about the diversity, which is an important feature of this story as well. It’s just so amazing – I can’t help but gush. This is one of those books I would recommend to everyone. It’s great. Go read it.