The year is 2575 and two mega-corporations are at war over a planet that’s little more than an ice covered speck.

Too bad nobody thought to warn the people living on it. With enemy fire raining down on them, Ezra and Kady have to make their escape on the evacuating fleet. But their troubles are just beginning. A deadly plague has broken out on one of the spaceships and it is mutating with terrifying results. Their ship’s protection is seriously flawed. No one will say what is going on.

As Kady hacks into a tangled web of data to find the truth, it’s clear only one person can help her. Ezra. And the only problem with that is they split up before all this trouble started and she isn’t supposed to be talking to him. 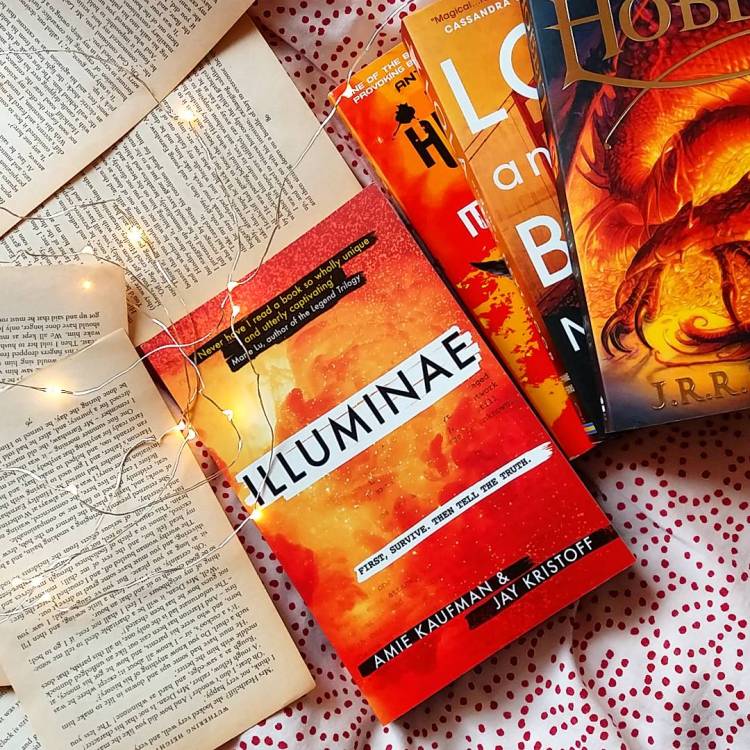 Okay, so once again I’m a little late to hop on the bandwagon, but I recently read Illuminae by Amie Kaufman and Jay Kristoff and I really really liked it. I bought it a good while back purely based on the recommendations of other bloggers – because everybody seemed to be raving about it. The unusual format had me interested  so I decided to give it a go. I wasn’t too convinced I’d be loving it, but Illuminae completely surprised me. Here’s why!

1. The format totally worked
Honestly, I wasn’t expecting it to. I know everyone said the format was amazing, but I just thought it wouldn’t really work for me personally. Illuminae isn’t a traditional narrative; instead, the story consists of a file that is presented by “The Illuminae Group” to an unknown recipient (at the start). In turn, this file is made up out of chats, emails, and all kinds of official documents and other types of documentation. Not only is it very visually pleasing, it’s also just so cool. I was afraid I wouldn’t be able to connect to the characters and to the story because of this format, but I was wrong. It made it all the more captivating and intriguing.

2. It’s extremely dark and kinda terrifying
Okay, so this was by far the biggest surprise to me. This story is SO DARK. I didn’t expect that at all from a YA science fiction novel. I’m not sure what I was expecting, but it definitely wasn’t this. I’d say it’s pretty dark even for adult novel standards. The stakes are extremely high: it’s life or (painful) death. Ezra and Kady experience some inexplicably horrible things, and the plague and the other secret stuff that’s going on is no joke.

3. Yet so funny at the same time
Speaking of jokes (look at that segue!), Illuminae is so funny! Even in between all the incredibly dark stuff going on, Kady and Ezra never lose their sense of humour. It can be bleak, it can be wry, but it is always witty. I snorted out loud a couple of times while reading, while also being worried about what was going to happen next…

4. So many plot twists!
Damn, I’m killing it with those segues. This plot has so many plot twists it almost made me dizzy. But not the type of plot twist that feels fabricated (I’m looking at you, Empire of Storms), but the kind that made me go: “OH MY GOD, I had no idea but of course that’s what’s going on!” or just “holy hell, what is happening, how will they ever come back from this”. It’s an experience, I tell ya.

5. The romance wasn’t annoying and/or out of place
The last sentence from that synopsis above (“And the only problem with that is they split up before all this trouble started and she isn’t supposed to be talking to him.”) made me roll my eyes a little bit. I was afraid this novel was going to be much more about teenage angsty romance drama and that it would take away from the actual kickass story going on, but that wasn’t the case at all! The relationship between Kady and Ezra was actually a nice distraction from everything else that was going on.

6. The ending wasn’t crappy
At one point in the story I thought: “I don’t see how they’re ever going to end this in a satisfying way”. I just couldn’t see it. I’m not going to go into more detail, but I’ll just say that I was content with the ending. It was very fitting but not predictable. I liked it! I’m really curious how the series will continue – I’ve already got Gemina waiting for me on my shelves.

Illuminae is such a cool story! If you like sci-fi and high stakes, I’d definitely recommend giving it a go.

7 thoughts on “6 Reasons Why Illuminae Surprised Me”