Following the death of his mother, Max Friedman comes to believe that he is sharing his brain with a tumour. As he becomes focused on controlling the malignant tenant, he starts to lose touch with his friends and family, and with reality itself – so Max’s father sends him off to the artsy Baldwin School to regain his footing.

Soon, Max has joined a group of theatre misfits in a steam-punk production of Hamlet. He befriends Fish, a girl with pink hair and a troubled past, and The Monk, a boy who refuses to let go of the things he loves. Max starts to feel happy, and the ghosts of his past seem to be gone for ever.

But the tumour is always lurking in the wings – until one night it knocks him down, and Max is forced to face the truth.

Published by Pushkin Press in 2018 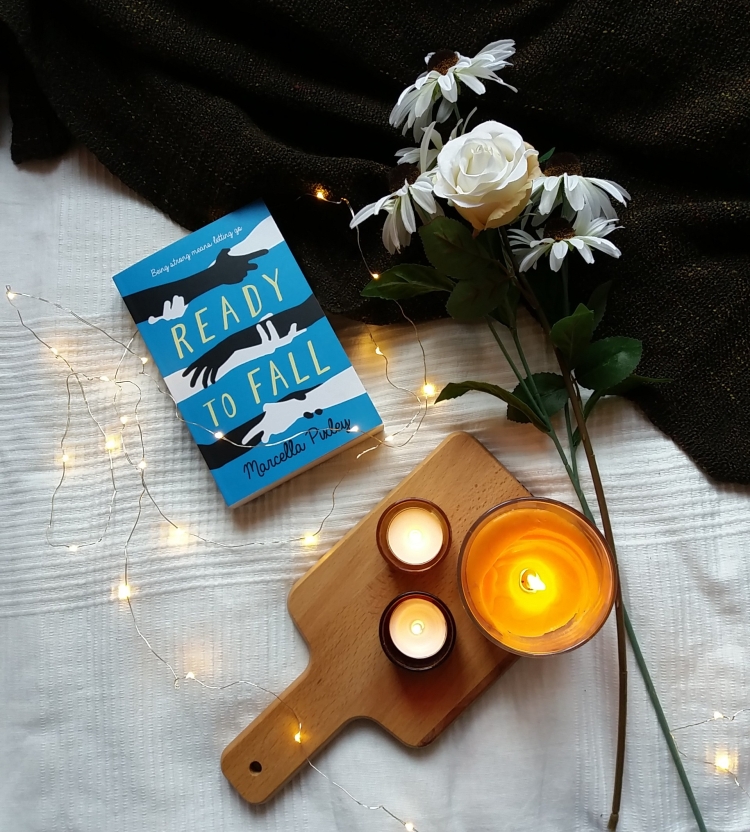 I hadn’t heard of Ready to Fall (or “that book that looks like The Fault in Our Stars“, as I like to call it) until I got an email from Pushkin Press asking if I was interested in reading this book that was supposed to be a mix of John Green and Rainbow Rowell. Uhm, yes, please.

Ready to Fall deals with some pretty heavy themes. Max loses his mother to cancer, which is absolutely terrible, of course. He wants to stay strong, because that’s what his mother wanted, according to his father (who’s also having a very tough time), which causes him to internalise all of his grief.

In fact, Max thinks that the tumour that was in his mother’s brain has crept into his own after she died. Obviously, this is impossible and as a reader you know this isn’t what’s really going on. Max does believe it, though, and it was kind of heartbreaking to read about. He tells no one about it, because he thinks people will think he’s insane. I also think he’s afraid to let go of the tumour, as it’s the last piece of his mother he still has left. He clings to it and when he finds out there is no tumour, he’s relieved but also deeply sad, which I thought was an aspect of the story that was beautifully done.

Max’s mother is still very present throughout the book, despite her death. You get glimpses of what she was like and of the love that existed between her and Max and Max’s father, Joe. It made the grief all the more tangible and painful. Although this isn’t Joe’s story, every now and then you also get to see how he deals with his wife’s death, and I really felt for him. I liked him a lot as a character and I liked that he loved Max so much, but also made mistakes in caring for him.

At his new school, Max gains a new set of friends, all of whom I didn’t really connect to. Fish was okay, but I was annoyed by the way Max idolises her and views her as this perfect being, even though she’s obviously very broken and does some questionable stuff. The Monk just bugged me throughout the entire story. He felt like a bully who didn’t have a whole lot of respect for anything or anyone. I also felt as if Max’s friends weren’t fleshed out all that much. They didn’t really feel like well-rounded characters.

Then there’s the issue of Dr Cage, who is the Creative Writing teacher at Max’s new school. He was just inappropriate, man. He’s supposed to be Max’s faculty advisor, but does a pretty shit job at it. I liked his voice in the story as he brought some lightheartedness, but I really didn’t like the way he was with Max. He kept touching him (not in appropriate places, but still) and when he’s drunk he wants Max to touch the scar on his belly. It all felt very iffy, yet apparently he’s everyone’s favourite teacher. I just felt weird about it.

One last point: I really liked how Pixley worked the story of Hamlet (and his grief) into Max’s. It helps Max deal with and understand his grief and it does so in a heartbreakingly beautiful way.

All in all, I think Ready to Fall has moments of absolute beauty when considering grief and what it does to a person, but there are some aspects I didn’t like very much. I’d still definitely recommend this if you like contemporary YA, though!

One thought on “A Study in Grief: My Thoughts on Ready to Fall by Marcella Pixley”