In a dusty library, in the quietest corner of a house in a Tokyo suburb, live the Little People: Fern and Balbo, Robin and Iris. Just a few inches high, sleeping cigarette boxes and crafting shoes from old book jackets, they need only one thing from their Humans–a nightly glass of milk, served in a sparkling blue glass goblet, by a trusted young member of the Human family.

But when the Second World War come to Japan, both Humans and their beloved Little People face a world they could never before have imagined. It will take great love, bravery, and a rather loyal pigeon, to bring their unique families back together once more…

First published: 1959 (in Japanese); this translation/edition is from 2018 by Pushkin Press 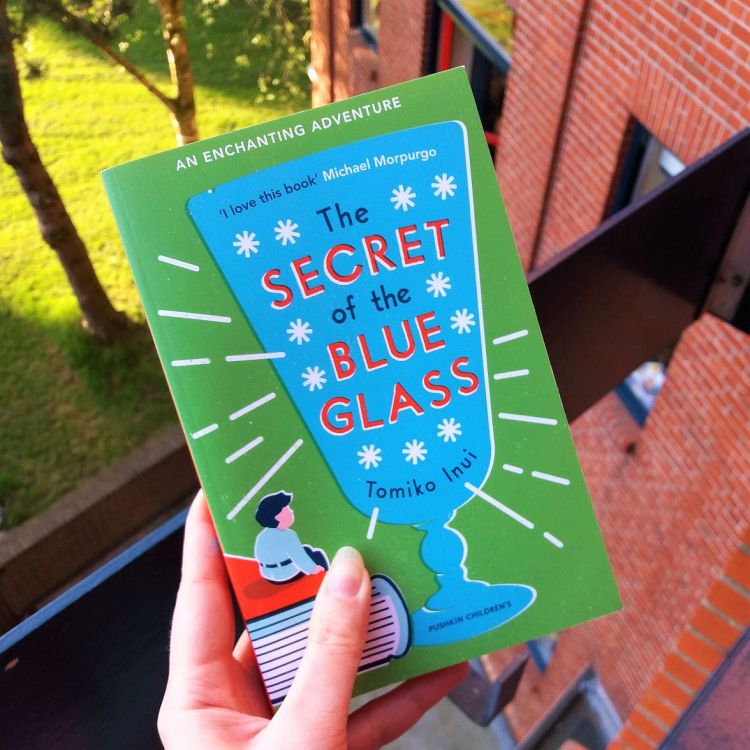 The Secret of the Blue Glass by Tomiko Inui was a very interesting read for me. Although there’s tons of translated Japanese fiction out there, I’ve never read any before, and certainly not any Japanese children’s fiction. When I read the summary for this book, I was intrigued. It wasn’t that the premise of the story seemed that extraordinary to me, but I realised it gave me an opportunity to read about the Second World War from a Japanese perspective.

As you will probably all know by now, I’m Dutch. In the Netherlands, we have a very rich history of Second World War literature. I think nearly every Dutch child (at least from my generation and older) will at some point have read a novel about The War (“de oorlog”). Of course, there’s the diary of Anne Frank, but there’s a lot more. The Second World War is very much still part of our culture. Just this past Friday we had our annual Remembrance of the Dead on May 4. I’m not sure what this will be like in the future, but as long as there are still people who lived it (like my grandparents), it will be part of us. We won’t soon forget the atrocities that happened.

My point here is that I know about the war, but I mostly only know about “our” side of it; the Dutch side of the war. Although I’ve read about other countries during the war, I think it’s fair to say most of what I’ve read has been from a Western perspective. I have no idea about what it was like during the war for regular Japanese families, for example. That’s what made this novel stand out to me; I figured it would give me an opportunity to learn.

Now, I would never claim to be an expert on Japan during the Second World War after reading this novel, not in the slightest. The Secret of the Blue Glass isn’t a war novel. It’s a children’s book that teaches compassion and tells a story about a little girl called Yuri Moriyama and the Little People she takes care of. But the war is definitely an important aspect of the story. It tears apart Yuri’s family and makes her (and the Little People) deeply unhappy for a long time.

It’s clear from the story what Tomiko Inui’s stance on the war is. The heroes of the story are compassionate and anti-war and the antagonists are the people who support the war and Japan’s position in it. There’s clear criticism in how Inui talks about young boys being sent off to be killed at the front. Or in the fact that Yuri’s father, a kind man, is imprisoned for his own criticism. I found Inui’s anti-war stance to be interesting as most of the people she depicted are aggressively pro-war, since they assumed that what their government did was the right thing. Although there’s no way to generalise the opinion of an entire country, it did make me wonder what the ‘general’ view was in that time. Plus, the book is from 1959, which gave Inui the benefit of hindsight.

At its essence, this is a story about Little People, who are part of well-known myth and folklore in Japan, as I was told. That’s not what I focused on while reading, though. In fact, I found the story of the Little People and their journey in itself to be slightly dull and the ending to be rather strange and unsatisfying. Of course, that might be a cultural difference, but I wouldn’t know.

The story of Yuri, the Little People and the blue glass is a children’s story and while I generally love those, this one didn’t fully grasp me. I did have a good time reading it, though, and as far as my objective to learn about Japan during the war goes, it fulfilled its purpose quite well. I learned something and I had a good time while doing so, and isn’t that what reading is all about?

One thought on “What I Learned about the War from a Children’s Book: The Secret of the Blue Glass”