Simon vs. the Homo Sapiens Agenda is one of those books that everybody seems to love. Some people adore it with a passion; others simply like it, but I haven’t seen anyone say “it’s crap, I don’t get why everbody loves this so much”, which is what does happen with most hyped books. I think that’s because even if you didn’t fully connect with the story, you can still see how sweet and warm it was and how it could mean a lot to other people. This book is kind of like a puppy, I guess.  It’s adorable and you just really don’t want to see anything bad happening to it. Is that a good analogy? We’ll just go with it.

I read the book in the summer of 2017 and I really liked it (you can read my full review here). I wasn’t completely blown away by it and there were some aspects that I didn’t think were great per se, but overall I thought Simon was absolutely lovely. It warmed my heart and gave me fuzzy feelings. Kind of like a puppy .

So, when it was announced that this book was going to be made into a film, I was overjoyed. Film adaptations have a long running history of being not that great, but I actually had high hopes for Love, Simon (I guess Simon vs. the Homo Sapiens Agenda was too long a title). I got more and more excited when other bloggers came back super enthusiastic from early screenings and articles started to pop up about Love, Simon being a lovely but also groundbreaking film. Last week, I got to see the film myself and I wasn’t disappointed in the slightest.

*gasp* I know! A bookworm who likes the film better than the book?! Hell must have frozen over! This is certainly a first for me (I think)! So, let me explain. 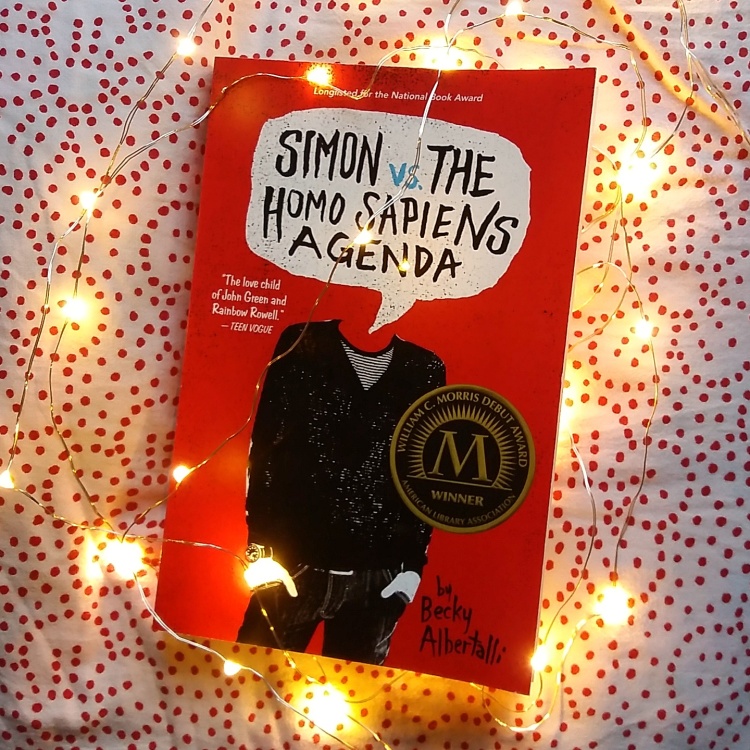 Like I said, I did really like the book (I gave it 4 stars on Goodreads). It’s just that the things that had me going “meh” in the book weren’t a part of the film or were done in such a way that they didn’t bother me.

My biggest ‘issue’ with Simon (that title is too long) was the writing style. It took me a while to get into the book because the sentences were a bit too short and fragmented for my taste. I had to get used to that and although I didn’t really mind later on, I do think it influenced my overall experience of the book.

Of course, with a film, that’s not really an issue. I liked the way the film was set up and I loved Simon’s narration and the way the emails between him and Blue were interwoven throughout the film. That was done really cleverly, cinematically speaking, that can’t be achieved in a written story. This, among other small things, made me realise that Simon’s story is exceptonally well suited for the big screen.

I already loved Simon as a protagonist in the book, but I think I loved him even more in the film. He’s such a well-written character in the book and I loved his personality. He has a flair for the dramatic as well as a lot of teenage angst, but that doesn’t define him and neither does his sexuality. Plus, he’s super sweet. Nick Robinson plays Simon in the film, and he did it so well! To me, he really is the perfect Simon. He has the charm that’s needed to play Simon, and he made me care about the character even more.

In the book, the high school drama was a bit too high school-y for me, but I really liked how this was done in the film. I was never once bored and I loved all of the characters (except Martin, of course). I didn’t mind any of the changes they made in the story either. If anything, I preferred them. And then there was the ending… Some people in the cinema actually started clapping because the build up was so well done and everyone just wanted Simon to be happy and everything to work out alright. The film really managed to get people emotionally invested.

I also just wanted to mention the fact that Love, Simon is the first film by a major Hollywood studio that focuses on teenage gay romance. And then to do it so well! I feel weirdly proud of the YA genre to create something so wonderful.

Perhaps that has something to do with my love for this film as well. It’s big; it’s progress. So was the book, of course, and I don’t want to discredit that, but the fact that this heartwarming book with an important topic was picked up by a major Hollywood studio… That’s just amazing.

Have you seen Love, Simon or do you still want to? What did you think of the film? How about the book? Let me know in the comments because I’d love to chat about it!

7 thoughts on “Love, Simon vs the Book (spoiler: the film wins)”