Sixteen-year-old Bri wants to be one of the greatest rappers of all time. Or at least make it out of her neighborhood one day. As the daughter of an underground rap legend who died before he hit big, Bri’s got big shoes to fill. But now that her mom has unexpectedly lost her job, food banks and shutoff notices are as much a part of Bri’s life as beats and rhymes. With bills piling up and homelessness staring her family down, Bri no longer just wants to make it—she has to make it. 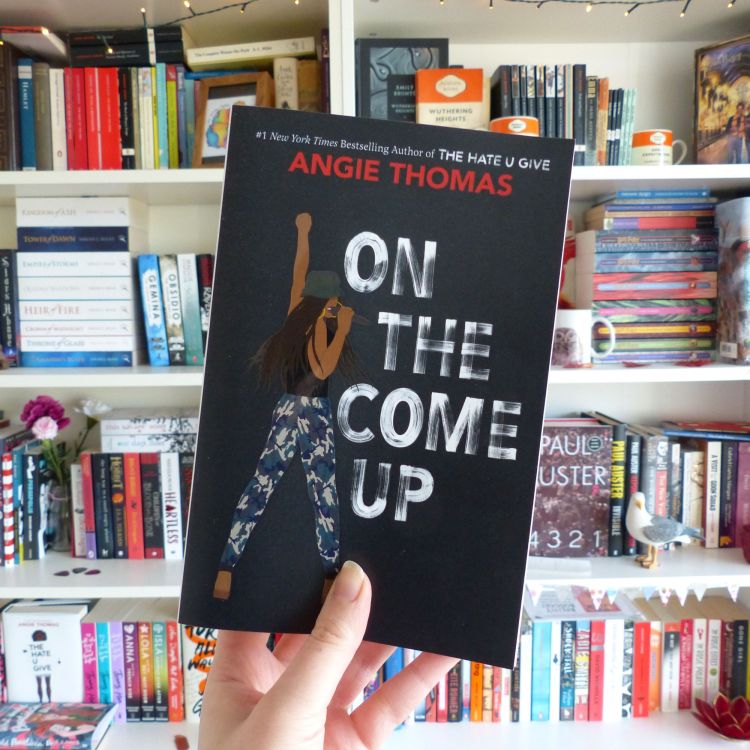 When Angie Thomas announced her second novel, On the Come Up, I got hyped right away. I absolutely loved her first novel, The Hate U Give, and I’ll keep preaching about its importance and brilliance to anyone who does or doesn’t want to hear it until the end of time. The synopsis of On the Come Up sounded amazing as well, but I had this nagging little fear. THUG had become one of my all-time favourite books and I was a little afraid anything that would come after was bound to be at least somewhat disappointing.

I was very wrong.

On the Come Up is another brilliant novel and I’m so glad Angie Thomas is getting so much recognition. When I finished this, I immediately felt like rereading it, which is not something I’ve ever experienced before, I think.

First, let’s talk about Bri, our main character. Man, I loved her. She makes a lot of decisions some would deem not very smart, but as a reader, I always understood her reasoning behind them. Plus, let’s not forget she’s only sixteen years old. She’s still a child (although no sixteen-year-old likes being called that) but she’s faced with some very grown-up problems. The way she deals with them felt very realistic and fitting with her personality. She’s quick to jump to conclusions, gets angry quickly (often rightfully so, I thought) and is very loyal to her family. She’s also a huge geek, which I adored. The Star Wars references are all over the place, which made me love this book even more. I loved that Bri was both a badass, amazing rapper and an unapologetic geek.

Family plays a big role in this book, as it did in THUG. We find out pretty early on that Bri and her older brother Trey (who is the best, by the way) lived with their grandparents for a while when their mother Jay’s drug addiction got really bad. It’s clear that Bri has had a rough time of it, with her father dying early on as well, but she loves her family so fiercely. I loved her relationship with both her mother and her brother and the sacrifices they are all willing to make for each other, like Trey coming to live back home instead of going to do his Master’s at university. There was, of course, something very sad about these sacrifices, but they also really showed the love within the family.

Another very important part of the book is hip-hop. I know very little about hip-hop and I’ll admit it’s not exactly my favourite musical genre to listen to. However, I loved it in On the Come Up! The rap battles had me on the edge of my seat and I was amazed at the amazing lines and rhymes Bri came up with on the spot. Also, damn, Angie Thomas got some skills! She really can do it all, can’t she? I don’t think I knew even half of the rapper names Bri mentioned in the story, but that didn’t bother me. I got so immersed in the world that I just went with it all and I learned a lot of new things on the way. In fact, it was one of my favourite parts of the book, I think. Although having said that, I loved everything about this book, so it’s hard to say.

One thing I haven’t talked about yet is the important theme of racism and the black experience. This was a very prominent theme in THUG, of course, but it is important in On the Come Up again as well. Bri experiences racism and discrimination every single day at school and at the start of the book you see a very clear example of this when she gets manhandled (or assaulted, as I’d call it) by two white security officers at school. It’s a very traumatic experience for Bri, but most white people brush it off. This is the clearest, most poignant example of how racist (American) society is, but there are many more small moments throughout the book. Angie Thomas writes these so well, and it just shows once more how important #ownvoices novels are. The anger and frustration shine through every single word and I felt them as I read them. I also had a constant feeling of impending doom or danger when it came to Bri and her family, and I thought that was very well done.

I could say a lot more about this amazing novel – I haven’t even talked about the side characters yet, or the romance! But I’ll stop now since I think I’ve gushed enough already. Conclusion: Angie Thomas is insanely talented and I hope she writes many, many more books because I will devour them all!