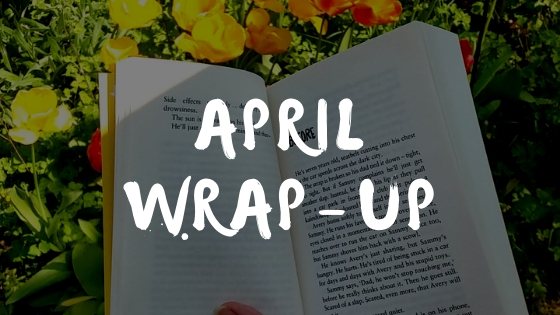 Usually, I feel like the months simply fly by, but the start of April seems like such a long time ago! I had quite an ambitious plan for April: I was going to participate in the Magical Readathon and try to write 30,000 words for the novel I’m working on during Camp NaNoWriMo. Those two events happened to be in the same month and instead of being sad about having to choose one of them, I decided to do both. Spoiler: I only succeeded at one and failed quite spectacularly at the other one. But that’s okay because we’re all about having fun here at Books Baking and Blogging, and I did have a lot of fun! So much so that I decided to tell you all about it. I don’t normally write wrap-ups, but I figured this month deserved one!

For those of you that don’t know, “NaNoWriMo” stands for National Novel Writing Month, during which the goal is to write a novel of 50,000 words. I guess the “national” part isn’t all that relevant anymore because people from all over the world (including myself) participate each year. The official NaNoWriMo is in November, but for a couple of years now they’ve also been organising “Camps” in April and July, which are a bit more relaxed than November since you can set your own word goal.

I decided to participate this year because I’ve been working on a novel for quite some time now and I really want to finish it this year – preferably sooner rather than later – and Camp NaNo could help me out with that. I set my word goal to 30,000, which I figured would be challenging yet doable. Well… I started out really well and even made a tiny bit of a headstart during the first week. The second week went alright as well, but then it all went sideways. I got a bit stuck in my story and I didn’t know how I should continue.

The trouble with having to write 1,000 words a day on average is that you don’t really get any room to breathe, take a step back and do some more plotting if necessary. I decided to do that anyway when I got stuck, and I did figure out how to keep the story going, so that was good. However, that pause, as well some life things that had me unable to write much, caused me to be so far behind on my word goal that I kind of just… gave up, I guess. It doesn’t really feel that way, though: it doesn’t feel like I’ve failed. I managed to write over 12,000 words for my novel, which is way more than I would’ve done in April otherwise. So, that’s definitely a win! I’m much closer to finishing now, and that was the main goal after all. It would’ve been cool to actually write 30,000 words, but I’m fine with how things went. In fact, I’d say I’m quite proud of myself!

Now, for the success story of this wrap-up; the Magical Readathon! The Magical Readathon is a Harry Potter-inspired readathon created and organised by G from Book Roast – and it is amazing. You can watch her video explaining everything right here. Basically, it’s a readathon inspired by the exams all students at Hogwarts School of Witchcraft and Wizardry have to take. You have the O.W.L.s, taken at the end of the fifth year, and the N.E.W.T.s, taken at the end of the seventh year at Hogwarts.

G has turned this into two readathons: one in April (when you take your OWLs) and one later in the year (I believe in August) for the NEWTs – and I think she hosts a few shorter ones in between as well. She has set reading prompts for every OWL you can take. This means that, for example, if you want to pass your Transfiguration OWL, you need to read a book with a red cover. This year, she’s also devised a whole career system. If you want to go into a certain career after you leave Hogwarts, you have to pass some specific OWLs related to that career. It’s a fun extra feature that helps you decide which OWLs you want to go for, and it also adds an extra challenge. G goes into way more detail in the video, if you’re interested.

I decided I want to be a Librarian after I leave Hogwarts, which meant I had to pass 5 OWLs, namely Ancient Runes, Arithmancy, Defence Against the Dark Arts, History of Magic and Transfiguration. And I managed to pass all of them! In fact, I even passed one extra exam (Herbology) because I still had some time left in the month. Here are the prompts and the books I read for them!

I was planning on also doing mini-reviews in this post, but it’s already so long that I’ll write a separate post with my mini-reviews for all of the books I finished in April. I hope to get that up this weekend!

I had so much fun with the O.W.L.s this April and I’m so impressed with G for managing to think all of this up and then organising it as well as she did too. There were amazingly detailed events on Twitter where you could earn house points (shoutout to my fellow Ravenclaws!) and there’s a giant list where everyone could enter the books they’d finished. Together, all of the participants have now read over 3.6 million pages! And that’s just all of us who’ve entered our books into the spreadsheet! I can’t wait until August, when the NEWTs are happening. This readathon made my reading month so much fun and I also think I’ve read more than I would have otherwise. It’s a win all around!

How was your month? Did you participate in Camp NaNoWriMo or the Magical Readathon, too? How did you do? What books did you read? I’d love to chat with you about all of this in the comments!

One thought on “April Wrap-Up: Camp NaNoWriMo and the Magical Readathon”