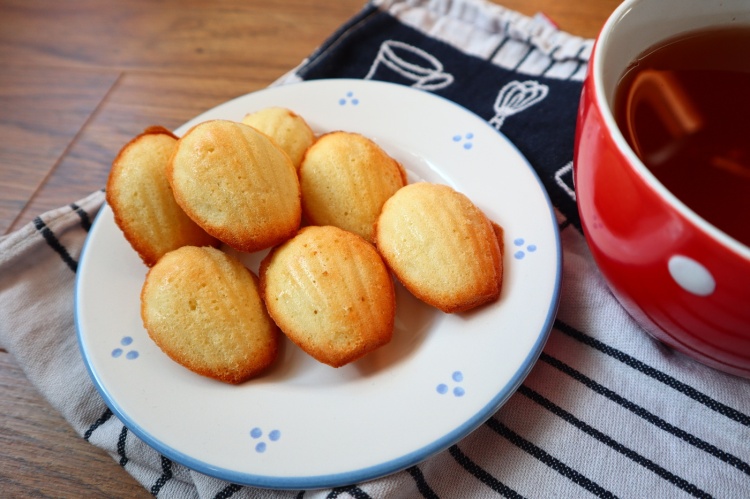 Nearly every year, my parents and I go on holiday to the same small village on the coast of Normandy, France: Anneville-sur-Mer (once chosen for its name). This year, we went in the first half of September and it was as wonderful as ever! It’s one of my favourite places to be: in just a minute’s stroll you’re on the beach with the most beautiful sunsets and it’s as quiet as can be (apart from the sea, which is very soothing). I always get lots of reading done there as well.

Another thing I always do when we’re there is buy baking stuff in one of the giant supermarkets. Either a mould or tin, or some ingredient that’s much more expensive in the Netherlands, or something completely different. This time, on one of the last days, I came across a silicone madeleine mould for three euros, so of course, that ended up being mine. I’d never baked madeleines (tiny, sweet cakes in the shape of shells) before, but now I could!

I should’ve bought two moulds, though, because this madeleine recipe I’ve got for you today makes about a gazillion of them and my mould only has twelve holes. I think I must have made at least five batches before I got sick of it and dumped the rest of the mixture into my mini-muffin tin (still tasted great, but they didn’t look as pretty).

For these madeleines, I used a recipe from the first recipe book I ever bought. The instructions weren’t super clear, though, so I had to go with my gut a few times, which was fun! The recipe I wrote down for you is a little more elaborate. It also calls for orange blossom water, which I still had because I used it in another recipe once. I think you can easily replace it with vanilla, though, because after some research I don’t think orange blossom water is necessarily a staple ingredient of madeleines.

Anyway, on to the recipe!

You’ll need… (for a truckload of madeleines)

1. Whip up egg whites The first step of this recipe is to split all five of the eggs. Put aside the egg yolks – you’re going to need those in a bit. Take the egg whites and put them in a large metal bowl, or the bowl of your stand mixer. Before you do this, make sure it’s completely grease-free. To make it grease-free, you can wipe it down with a bit of vinegar or lemon juice. Add a small pinch of salt to the egg whites and then whip them up until they’re completely stiff. That means that if you take out your whisk, the egg whites will have stiff peaks. Put the bowl to the side for now.

A quick tip for separating multiple eggs: make sure you separate the egg above a small bowl and then pour the egg white in another bowl before moving on the next egg. That way, if you mess up separating the fifth egg and some yolk gets in there with the white, you only have to throw out one egg white instead of five!

4. Add butter Once the butter has melted completely, let it cool for just a little bit (so the hot butter doesn’t scramble the egg yolks). Then, add the butter to the egg yolk mixture and mix it through.

6. Bake! Grease your madeleine mould or tin. Use two small spoons to spoon the mixture into it. You can also use a piping bag (I only realised this after I was halfway through, so I just used spoons). Next, place the mould/tin in your preheated oven and bake the madeleines for about 12 minutes. Don’t bake them for too long or they will end up tough and dry. They should become a little brown around the edges. Let them cool for a few minutes and then start eating them right away because yum. They taste really good while they’re still warm, but you can also let them cool down completely and then store them in an airtight container for a few days.

And that’s it! You’ve got your own sweet French madeleines! Enjoy! 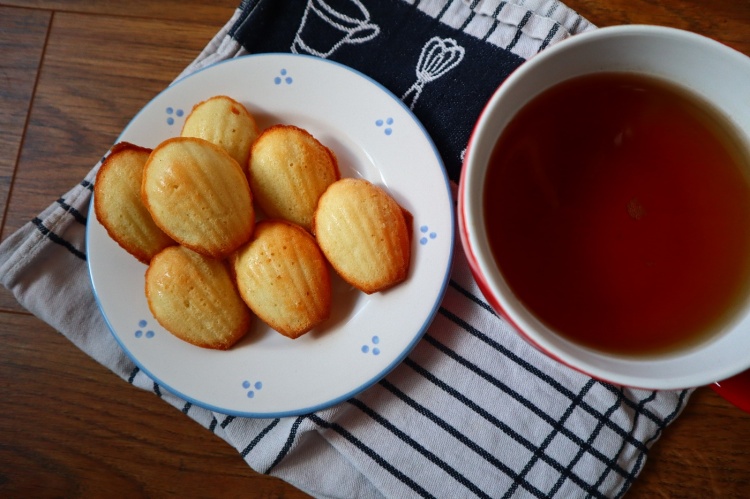