Earlier this week, I went to visit my grandfather for the first time in a few months, together with my father. The weather was beautiful, so even though it was already way past dinnertime, it was still nice enough to sit outside. My father worked in the garden for a bit, and we had a nice cup of tea together. My grandfather, who turned 90 last year, still has his own vegetable patch, where he grows a few different fruits and veggies. One of those veggies is rhubarb, and he handed me six fresh stalks to take home with me.

Now, I’m going to be honest here: I don’t know a lot about rhubarb. I think I’ve had it only a handful of times and I’ve certainly never prepared it myself. But it seemed a fun new thing to try! I ended up doing the easiest thing you can do with rhubarb: turning it into rhubarb compote (and then later using that to make a rhubarb crumble – recipe to come).

You might be wondering why my rhubarb compote doesn’t have that delightful pink-ish colour most rhubarb compotes have. That’s because the stalks I had were mostly green. I did some research and apparently you’ve got two types of rhubarb: pink and green. The only real difference (apart from the colour) is the fact that the green one is a little more tart, which means you’ll have to add a bit more sugar to it. For this recipe, you can use either type of rhubarb!

Rhubarb compote is very versatile: you can use it to make a crumble, add some to your ice cream or your breakfast, or even just have it with some potatoes or fries for dinner, although this might be more of a Dutch thing – it’s delicious, though! 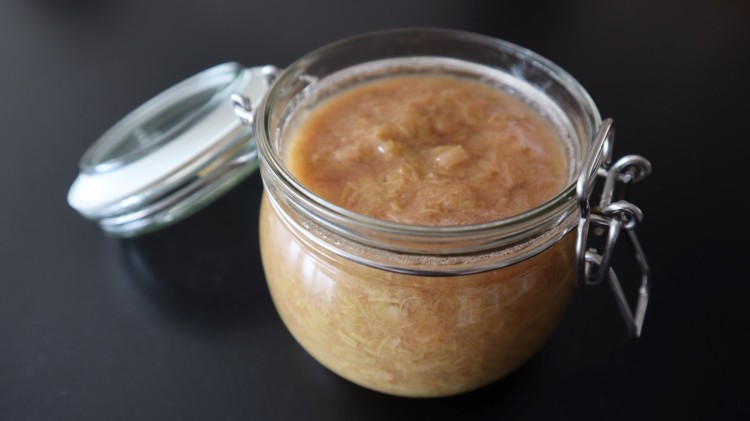 1. Prepare rhubarb stalks Clean the stalks of rhubarb by washing them with tap water. Cut off the ends and then cut the stalks into small pieces, about 1 cm wide.

2. Boil rhubarb Take your saucepan, add a tiny layer of water (just enough to cover the bottom) and add the pieces of rhubarb to it, along with 3 tablespoons of cane sugar. Bring it up to a boil and then let it simmer on low heat for about 10 to 12 minutes. Stir every few minutes.

3. Add cinnamon and more sugar You can check whether the rhubarb is done by stirring it one last time. If all of the rhubarb has basically fallen apart and it’s all become one big (delicious) mush, it’s done. Now it’s time to add some more flavour. I added a generous sprinkle of ground cinnamon, but you could also add ground cloves, maybe even ginger: whatever suits your fancy. This is also the moment to add more sugar to taste. Since I used green rhubarb, 3 tablespoons really wasn’t enough; I think I added 5 or 6 tablespoons more. Again, it’s up to you how sweet or tart you want your compote to be.

4. Let cool Once you’ve added all of the extra ingredients, transfer it to a proper container (like a nice jar) and let it cool.

And that’s it! You’ve got your own easy-peasy rhubarb compote! Enjoy! 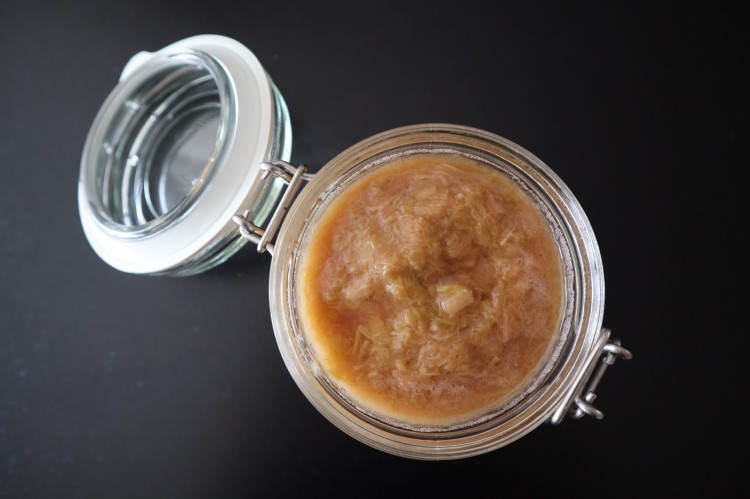