For cynical twenty-three-year-old August, moving to New York City is supposed to prove her right: that things like magic and cinematic love stories don’t exist, and the only smart way to go through life is alone. She can’t imagine how waiting tables at a 24-hour pancake diner and moving in with too many weird roommates could possibly change that. And there’s certainly no chance of her subway commute being anything more than a daily trudge through boredom and electrical failures.

But then, there’s this gorgeous girl on the train.

Jane. Dazzling, charming, mysterious, impossible Jane. Jane with her rough edges and swoopy hair and soft smile, showing up in a leather jacket to save August’s day when she needed it most. August’s subway crush becomes the best part of her day, but pretty soon, she discovers there’s one big problem: Jane doesn’t just look like an old school punk rocker. She’s literally displaced in time from the 1970s, and August is going to have to use everything she tried to leave in her own past to help her. Maybe it’s time to start believing in some things, after all. 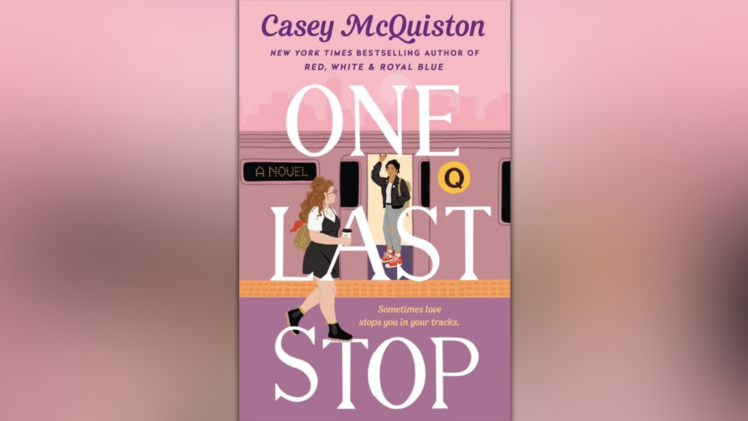 After reading Red, White and Royal Blue earlier this year, I was convinced Casey McQuiston could be one of my new favourite authors, so I was excited to pick up One Last Stop when it came out last month. It’s been a few days since I finished the book, and I’m still not entirely sure what I think of it. There were things I absolutely adored, but there were also a few aspects I wasn’t a fan of at all. Let’s get into them!

What I loved about One Last Stop is its characters and the way they interact with one another. August is a great main character, although she did need to grow on me a little before I really came to love her. I also loved Jane and the many sides to her personality and the way she approaches life. However, the characters that I really fell in love with were August’s flatmates Niko, Myla and Wes, as well as their neighbour Isaiah. Their distinct personalities, their roles within the group and their banter were so wonderful. Throughout the entire book, I looked forward to any scenes with these side characters.

I also loved the focus on found family. August has a difficult relationship with her mother and we learn at the start of the book that she struggles letting people in. She’s convinced that it’s better to just try and make it on her own, and that’s what she’s planning to do when she moves to New York. Niko, Myla and Wes ruin that plan for her, but in the best way. They welcome August into their home and found family with open arms and it felt really special to see August experience such a warm, loving friend group for the first time. The book shows us in a wonderful way that family isn’t all about blood. It’s whatever you want it to be.

The focus on diversity and gay rights was also an aspect I really enjoyed. Since Jane is from the seventies, her experience of being queer in America is very different than August’s. They have some interesting conversations about this, which really made August (and me) think. Drag is also heavily featured in this novel, which I really loved. I don’t know a lot about drag, but it was so fun to read about the joy and good times these characters had. The sense of community that came into play here was also very heartwarming.

So, what didn’t I like about One Last Stop?

Well, the plot, basically. Which is a pretty big part of any story. August finds out early on in the story that Jane isn’t from our time; she’s from the 1970s, and she’s stuck. So, August, ever the detective, wants to figure out how this happened and, more importantly, how to fix the problem. This fantastical element was something that initially really drew me to the book, because I usually love contemporary stories with a fantastical twist. However, in One Last Stop it just didn’t really work for me. This mostly had to do with how they’re trying to fix the problem. The characters come up with a logical explanation for an entirely illogical situation with absolutely no precedent, and that bugged me. I couldn’t suspend my disbelief for that part of the story, and that influenced my enjoyment of it. I still loved the characters, I loved most of the side plots, but this main problem at the heart of the story just didn’t do it for me. My inability to suspend my disbelief also extended to the many coincidences within the story, which at some point started to get on my nerves.

I also didn’t enjoy the pacing of the novel. Like Red, White and Royal Blue, this book is quite long for a romance novel (over 400 pages), but while that didn’t bother me at all with RW&RB, I do think that One Last Stop was slightly too long. Even though there’s a lot going on, with the romance, the mystery and a sideplot involving Pancake Billy’s House of Pancakes, August’s amazing place of work, the story still dragged in certain places. That caused my attention and enjoyment to lag a little bit, and I think that’s a pity.

So, where do I stand on One Last Stop? I’m still not sure! I think I would’ve absolutely adored a book with these characters, this New York setting and a romance between the two main girls, if only the plot would’ve been slightly different. If there’s one thing this book convinced me of, though, it’s the fact that Casey McQuiston writes the most vibrant, wonderful characters, and for that alone I would recommend this book. It also makes me very excited about anything she’ll write next!