It’s been a while since I last posted a recipe, and that’s because it’s also been a while since I last came up with something new. I did bake a few times over the past two months, but there’s not been any recipe making. Turns out, I missed it! It was so much fun to make these banana cupcakes for my boyfriend’s belated birthday celebration with his boardgame group a few days ago. And it was definitely satisfying when everybody adored these little cakes! The frosting was especially popular: it’s silky smooth and has just a hint of cinnamon, which complements the banana perfectly.

I don’t often make cupcakes because I have to admit that I’m not a huge fan of frosting usually – I tolerate buttercream, but I’m not fond of it. Also, from a practical point of few, it’s much harder to store frosted cupcakes than it is a batch of cookies. But now that these banana cupcakes were such a success, I’m of a mind to experiment witch cupcakes a bit more often, especially now that I know the cream cheese frosting is such a hit. Maybe I’ll try a version with orange flavour, or peanut butter… So many options! 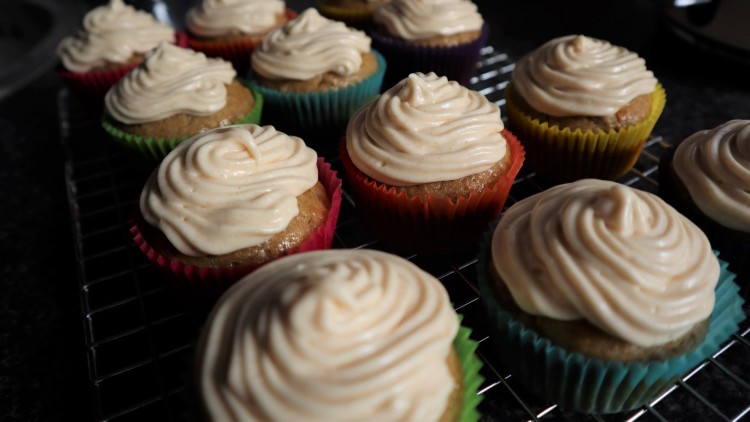 3. Add bananas Mash your bananas until there are no big lumps left. I did the rough mashing with a spoon, and then used a handheld mixer to properly puree the bananas. You could also use a food processor. Now, add the mashed bananas to the mixture and mix until fully combined.

6. Bake! Line the cupcake tin with the paper cases (or grease and flour the tins if you’re not using paper cases). Then, divide the batter over the paper cases until all cases are filled about ⅔ or ¾. Put the tin into your preheated oven and bake the cupcakes at 180 °C for about 20-22 minutes or until a skewer comes out clean.

8. Prepare the frosting While your cupcakes are cooling, you can start preparing the frosting. Mix together the cream cheese and the butter until they’ve come together in a soft and smooth mixture. I recommend using a stand mixer or a handheld mixer for this. Then, add the vanilla aroma and cinnamon and mix them through. Lastly, gradually add the icing sugar to the mixture and mix it all until you’ve got a nice and fluffy frosting. Place the frosting into the fridge for 10 to 15 minutes to let it cool. It’ll be easier to pipe that way.

Not a fan of cinnamon? If you leave out the cinnamon, the frosting will still be delicious!

9. Frost the cupcakes! Once your cakes have cooled down completely, you can frost them. Prepare your piping bag (add the nozzle; make sure the hole is big enough) and transfer the frosting into the bag. Then, pipe the frosting onto your cupcakes.

And that’s it! You’ve got your own delicious banana cupcakes with cream cheese frosting. Enjoy! 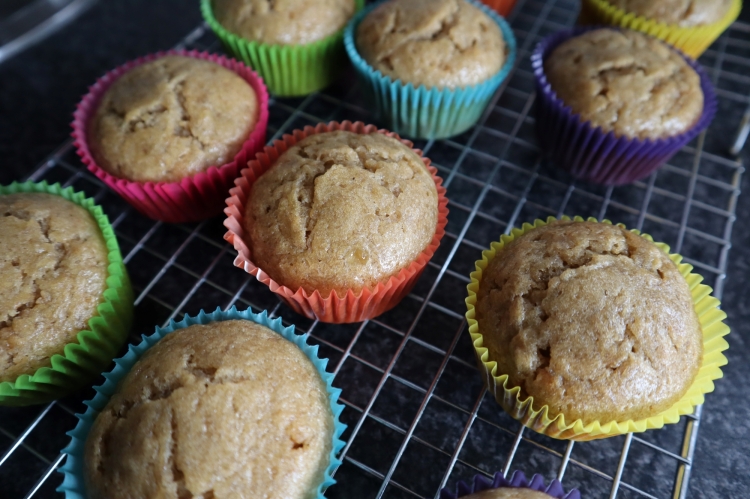