I thought apple turnovers were a Dutch delicacy, until I Googled them this morning. Turns out, they’re quite international! I didn’t do any extensive research on them or anything, but Wikipedia didn’t mention any specific origin, and Google gave lots of non-Dutch recipes, so that made things kinda clear.

On the 31st December my mother buys the oliebollen and apple turnovers at a stall in town. She has to do this in the morning, before work, because in the afternoon there’ll be an enormous queue in front of the stall. That’s the same every year — everyone needs to get some last minute oliebollen.

This year I told my mother she didn’t have to get any apple turnovers because I would make them myself. I’d never made them before, but they turned out really tasty, although I did tweak the recipe below a bit from the one I used. Apple turnovers are incredibly easy to make, so give it a go!

– some extra sugar for sprinkling purposes

– and an oven, of course! These turnovers need to be baked at 200 °C (don’t forget to preheat your oven!

1. Prepare the filling Like I said above, this is a very easy recipe with only a few simple steps! First off you need to peel and core the apples and then slice them into little cubes. Put them in a mixing bowl and add the raisins, cinnamon, sugar, almond paste, lemon juice and amaretto to it. Mix everything together with a spoon.

2. Put the stuff in the stuff Now, it’s time to bring in the puff pastry. Put some of the filling on one half of the pastry, but leave a little room at the edges. Brush some of the egg on these edges (it works as glue, basically). Then fold the pastry closed diagonally, like the ones in the picture. Press the edges down a bit with a fork. Do this for all ten of the pastry leaves.

3. Brush egg on the turnovers and sprinkle sugar on them You’ve got ten turnovers now, but before you put them in the oven there’s one step left! Put all of the turnovers on your baking tray (which should be lined with parchment paper) if you hadn’t done so yet. You’ve now got to brush some more of the egg onto the top sides of the turnovers, so that they’re nicely covered. Then sprinkle some sugar onto the turnovers. It’ll make them nice and crispy!

4. Bake ’em! All that’s left to do now is to put the baking tray with your turnovers into the oven and bake them for 22-25 minutes! 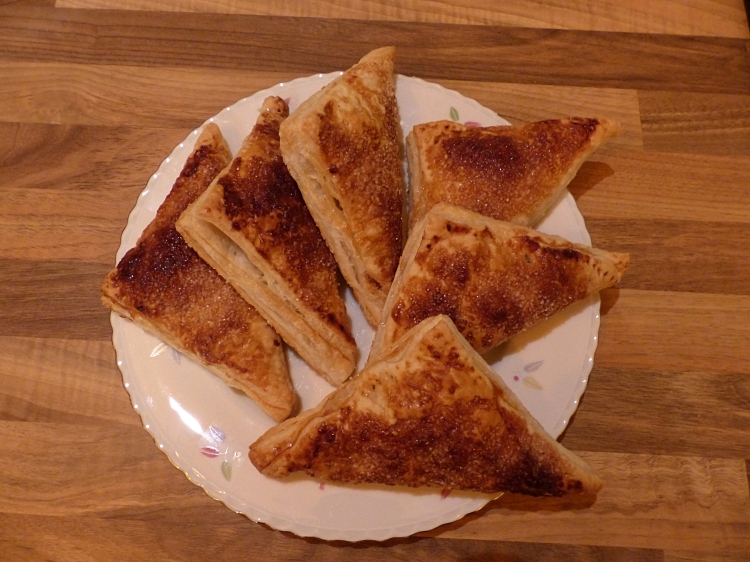 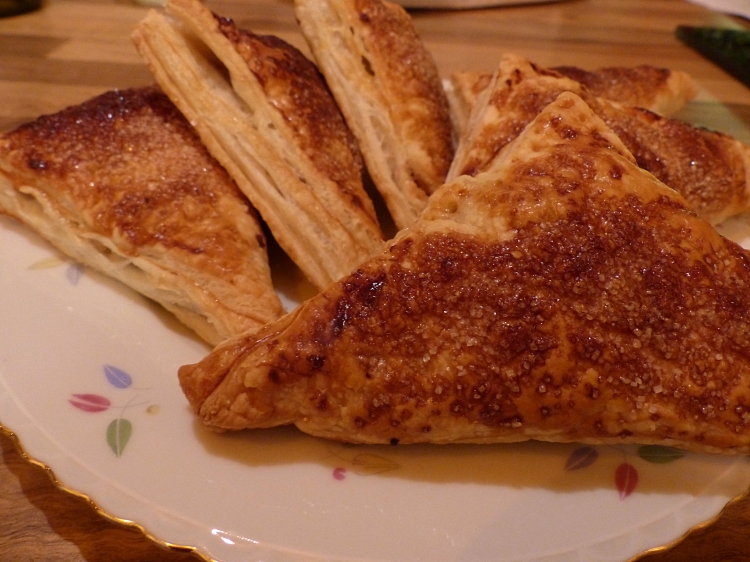 Join 3,016 other followers
Follow Books Baking and Blogging on WordPress.com