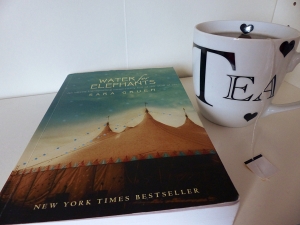 When Jacob Jankowski, recently orphaned and suddenly adrift, jumps into a passing train, he enters a world of freaks, swindlers and misfits in a second-rate circus struggling to survive.

A veterinary student who almost earned his degree, Jacob is put in charge of caring for the circus menagerie. It is there that Jacob meets Marlena, the beautiful equestrienne who is married to August, a charismatic but violently unpredictable animal trainer. Jacob also meets Rosie, an elephant who seems unmanageable until he discovers an unusual way to reach her.

The first thing I ever heard about Water for Elephants a few years ago is that it was written during NaNoWriMo (National Novel Writing Month). This immediately piqued my interest, since I’ve participated in NaNoWriMo myself a few times as well and therefore felt some kind of comradeship with the author. I didn’t even know what the book was about, but I decided that I wanted to read it.

That’s about three or four years ago now, I think… But a few months ago a friend of mine told me she bought Water for Elephants on an airport in Australia, for the trip home, and she asked me if I was interested in reading it. Heck yeah!

Water for Elephants really didn’t disappoint. It took me some time to really get into it, mainly because Sara Gruen used quite some circus jargon, which I’m not familiar with. Maybe I’d have known the words if English was my first language, but to me it proved to be a bit confusing at times. However, it also does show that Gruen properly did her research, which shines through in the entire book, and is praiseworthy, I think.

After getting used to the jargon, I was completely hooked. Gruen has a writing style that made me want to keep on reading and reading. Her way of structuring the story is just magnificent. After the prologue, in which the reader first meets Jacob as a young man and a vet for the circus, the story turns to Jacob as an old man (he’s ninety, or ninety-three – one or the other, as he says himself) living in a nursing home. He hates it there, and the only thing that keeps him somewhat sane is remembering and reminiscing about the time he spent working for Benzini Bros Most Spectacular Show on Earth. The story shifts from “present day” to Jacob’s memories in an almost stream of consciousness like manner. The transitions are completely natural in a way I’ve never seen before. Those transitions alone are little works of art.

What I find admirable as well is the fact that Gruen is not afraid of inflicting real tragedy and sadness on her characters. The story is heartbreaking at times, but it makes it all the more life like. Not only does it deal with true loss (of parents, friends, one’s hold on life), it also talks about the hardships of the Great Depression of the early thirties in a very real way, all the while not losing its main focus – the circus:

One by one the menagerie men leave. The animals, finally fed and watered, settle in for the night. At the end of a desperate day is peace.

I don’t read many historic novels, but I deeply enjoyed this one. This novel doesn’t have a particular audience, I think. I believe absolutely anyone can read Water for Elephants and love it. I certainly did.

2 thoughts on “Water for Elephants by Sara Gruen”