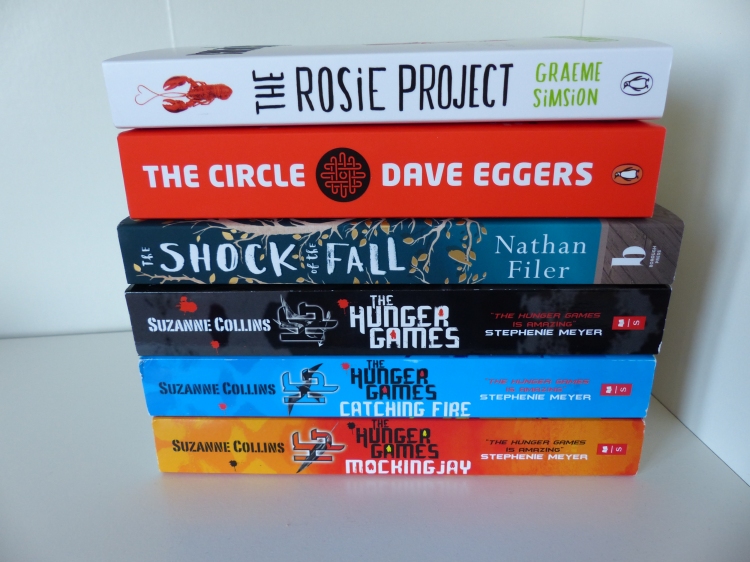 So… I went a bit nuts with ordering books again. Perhaps ordering six books doesn’t seem that crazy to some of you book bloggers out there, but on my budget it’s kind of a splurge. You can never have too many books, though, so I’m not even feeling remotely bad about it! There was a 2+1 offer, and I couldn’t just let that one go past without taking advantage of it, now could I? It also means I get to make another book haul post, which are always fun ones to do!

The Shock of the Fall by Nathan Filer

‘I’ll tell you what happened because it will be a good way to introduce my brother. His name’s Simon. I think you’re going to like him. I really do. But in a couple of pages he’ll be dead. And he was never the same after that.’

My thoughts: I hadn’t come across this book before, but I really loved the cover so I had a look. Turns out it’s about a man’s descent into mental illness. It’s probably going to be a pretty tough read, but I’ve always had a special interest in mental illness due to my family history. I’m looking forward to reading this book very much. Not going to do so on a bad day, though.

The Circle by Dave Eggers

The Circle runs everything — all your internet activity in one easy, safe and visible place. No wonder it is now the world’s most powerful and influential company. So when Mae Holland lands a job at its glitterin California campus, she knows she’s made it. But the more her ideals and ambitions become aligned with those of the Circle, the closer she comes to discovering a sinister truth at the heart of an organization seeking to remake the world in its image…

My thoughts: I’d seen this book all over the place, but I only got truly interested in it after reading this review written by Clare from A Little Blog of Books and Other Stuff. The premise sounds really intriguing and the idea of a social media company becoming that influential is quite scary, but also not that hard to imagine, if I’m honest. I think this book is going to be a really interesting read!

The Rosie Project by Graeme Simsion

Love isn’t an exact science — but no one told Don Tillman. A handsome thirty-nine-year-old geneticist, Don’s never had a second date. So he devises The Wife Project, a scientific test to find the perfect partner. Enter Rosie — ‘the world’s most incompatible woman’ — throwing Don’s safe, ordered life into chaos. Just what is this unsettling, alien emotion he is feeling?

My thoughts: Man, I’m looking forward to reading this book! It just seems like such a lovely read to curl up with on the couch with a big cup of tea. I’ve read lots about it here in the bookblogosphere, so I’ve got quite some expectations!

In a dark vision of the near future, twelve boys and twelve girls are forces to appear in a live TV show called The Hunger Games. There is only one rule: kill or be killed.

When sixteen-year-old Katniss Everdeen steps forward to take her sister’s place in the games, she sees it as a death sentence. But Katniss has been close to death before. For her, survival is second nature.

Against all odds, Katniss Everdeen and Peeta Mellark are still alive. Katniss should be relieved, but now there are whispers of a rebellion against the Capitol — a rebellion that Katniss and Peeta may have helped create.

As the nation watches Katniss and Peeta, the stakes are higher than ever. One false move and the consequences will be unimaginable.

Katniss Everdeen has survived the Hunger Games twice. But she’s still not safe. A revolution is unfolding, and everyone, it seems, has had a hand in the carefully laid plans — everyone except Katniss.

And yet she must play the most vital part in the final battle. Katniss must become their Mockingjay — the symbol of rebellion — no matter what the personal cost.

My thoughts: Yeah, so… I’ve never read The Hunger Games… Figured it was about time to do so! I’m actually really looking forward to reading these books because I’ve heard and read so so much about them. Now I want to find out for myself! My reviews for these novels are going to be immensely late compared to the hype, but I don’t care, I’m still going to post them. They’ll be new to me, at least!

So, those are the new books in my collection!  Have you read any of them? What did you think? No spoilers, please!