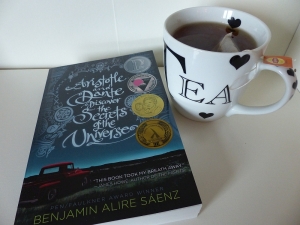 Dante can swim. Ari can’t. Dante is articulate and self-assured. Ari has a hard time with words and suffers from self-doubt. Dante gets lost in poetry and art. Ari gets lost in thoughts of his older brother who is in prison. Dante is fair skinned. Ari’s features are much darker. It seems that a boy like Dante, with his open and unique perspective on life, would be the last person to break down the walls that Ari has built around himself.

But against all odds, when Ari and Dante meet, they develop a special bond that will teach them the most important truths of their lives, and help define the people they want to be. But there are big hurdles in their way, and only by believing in each other – and the power of their friendship – can Ari and Dante emerge stronger on the other side.

I know the end of December is still quite a long way away, but I can already say with absolute certainty that Aristotle and Dante Discover the Secrets of the Universe is going to make it to my top ten favourite books of 2015 – perhaps even to the top 5. This is a beautiful, beautiful novel and I’m so glad I’ve finally read it! To give you a sense of my enthusiasm: I kind of felt like rereading it immediately after finishing the book and I’m pretty sure that if I had done that I would’ve enjoyed every minute of it.

The story is about Ari and Dante, two boys who are both from Mexican descent and who meet at the swimming pool one summer afternoon. Dante offers to teach Ari how to swim and that’s pretty much how their friendship is born. They’re very different people, Ari being way more dark and badass (as in, the kids around the neighbourhood know not to pick a fight with him) while Dante has a much softer nature and is a lot more vibrant. Despite their differences, however, they instantly connect and I adored how genuine both of them were, each in their own way.

Both are dealing with their own issues, although the book focuses a lot of more on Ari’s issues, since the story is told from his perspective. We get to discover more about Dante along with Ari which is such a nice way of discovering a character. Of course, we also get to know Ari along the way, although it is clear from the start that he is quite troubled. His brother is in jail and his parents won’t talk about him, which results in Ari almost obsessing over him and wanting to know about the past. Another thing he focuses on a lot is the fact that he hardly knows his father and the way this developed throughout the story was one of my favourite things about the book.

Ari and Dante’s parents in general were such a big part of the novel. Lately, I’ve seen quite a few bloggers talk about how parents are so often absent in YA novels, and that this can be quite a shame. I definitely agree with that sentiment, which made the big roles of the parents in this novel such a breath of fresh air. All four of them are portrayed as real people, not just the annoying parent that gets in the way of the amazing plans the kids have. They felt really real to me, and I loved reading about the relationships Ari and Dante have with their parents, which are very different but wonderful in their own right.

One thing I noticed other bloggers talk about is the fact that the story is quite slow, especially at the beginning. This didn’t bother me at all. In fact, I loved it. There is no major plot line within the book – it’s about these two boys who are learning all kinds of things about life and, of course, the “secrets of the universe”, and that was enough for me. As I heard Amy Palladino (the creator of Gilmore Girls) say in a panel the other day: “it’s in the small moments that lives change” and I think this statement characterises Aristotle and Dante Discover the Secrets of the Universe very well. There are a few big events, but they are not the focus of the story and are definitely not the most important things that happen within the story.

The last thing I want to talk about in this review is the writing. Oh, the writing. It is beautiful. There is so much dialogue, which is always my favourite part of any story, and the writing is crisp but so thoughtful and melodic at the same time.

I made up my mind that this was going to be my summer. If summer was a book then I was going to write something beautiful in it. In my own handwriting. But I had no idea what to write. And already the book was being written for me. Already it wasn’t all that promising. Already it was about more work and commitments.

In short, this book is absolutely amazing and basically I think everyone should read it. I didn’t mention it in this review, but this novel also has homosexuality as a big theme, which was one of the reasons why I wanted to read the book (I want to read more LGBT fiction). This theme was explored very beautifully, in my opinion, and I would highly recommend reading this book to anyone who is interested in that topic.