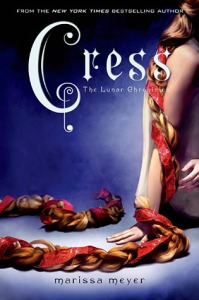 Cress, having risked everything to warn Cinder of Queen Levana’s evil plan, has a slight problem. She’s been imprisoned on a satellite since childhood and has only ever had her netscreens as company. All that screen time has made Cress an excellent hacker. Unfortunately, she’s just received orders from Levana to track down Cinder and her handsome accomplice.

When a daring rescue of Cress involving Cinder, Captain Thorne, Scarlet, and Wolf goes awry, the group is separated. Meanwhile, Queen Levana will let nothing prevent her marriage to Emperor Kai. Cress, Scarlet, and Cinder may not have signed up to save the world, but they may be the only hope the world has.

Cress is the third novel in The Lunar Chronicles, the fourth and last book of which is coming out next week! I loved the first two books, Cinder and Scarlet, so I was really looking forward to reading this one, and it didn’t disappoint one bit. This series just keeps getting better and better, it seems! Oh, and since this is the third book in the series, this review will contain spoilers for the first two books, so you have been warned.

For those of you who don’t know, all of the books in this series are based on a fairy tale, and the inspiration for Cress was Rapunzel, which was also the inspiration for my favourite Disney film (Tangled, duh), so it was fun to see the story in yet another form in this book.

The thing I loved most about Cress is all of the diverse characters. The cast of characters has expanded quite a bit since Cinder, and I love every single one of them. They’re all so different from each other! We’ve known Cinder the longest now, and I really enjoyed reading about the way she’s developing into her role as princess and saviour of the whole wide world. However, I love all of the other characters just as much. I was a bit bummed to see so little of Scarlet in this novel, though, but I understand that that whole storyline was necessary for the story. I’m sure she’ll be back in Winter!

Now, let’s talk about Cress, since she’s the title character and all. Cress is adorable. I loved her so much! Since she’s been locked up in a satellite for most of her life she doesn’t really have that much social skills, and she’s learned to rely on herself and her imagination to get her through tough times. That’s probably what I loved most about her – her huge imagination. She spends a lot of her time just dreaming up hypothetical situations in which she would be the star and these daydreams often help her stay sane. Many of these daydreams include Captain Thorne, and while I thought her crush on him was rather cringeworthy at times, it was also kind of cute and fitting for her character.

The whole situation of Cress and Thorne landing in the desert and being found and led to where they are led felt a little too convenient for me, but it was entertaining nonetheless, so no complaining from me. Okay, a little complaining: what are the freaking odds of not dying when you land in the middle of desert?!

Anyway, so much happens in this novel that I quickly forgot about that little thing. There are so many twists and turns, and while not all of them were very surprising (I saw some of them coming from a mile away), they were all very fun. This book is jam-packed full of action and I loved that about it. The ending just had me wanting to read on and on and the climax of this book is so cool.

One last thing I want to quickly touch upon is the political aspect of the novel. Queen Levana is still evil and still trying to take over the world, and it is very interesting to see how Kai and the other world leaders are trying to deal with this. I really love that part of this series, which has been present ever since Cinder.

While I don’t think I will be able to get my hands on Winter next week already (let alone read it straightaway), I cannot wait to read on! This series just has me hooked, it’s as simple as that.

5 thoughts on “Cress by Marissa Meyer”