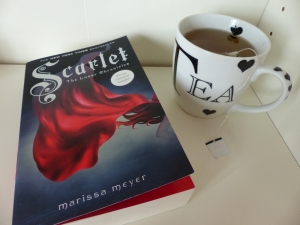 Cinder, the cyborg mechanic, returns in the second thrilling instalment of the bestselling Lunar Chronicles. She is trying to break out of prison — even though if she succeeds, she’ll be the Commonwealth’s most wanted fugitive.

Halfway around the world, Scarlet Benoit’s grandmother is missing. When Scarlet encounters Wolf, a street fighter who may have information about her grandmother’s whereabouts, she is loath to trust this stranger, but she is inexplicably drawn to him, and he to her. As Scarlet and Wolf unravel one mystery, they encounter another when they meet Cinder. Now, all of them must stay one step ahead of the vicious Lunar Queen Levana, who will do anything for the handsome Prince Kai to become her husband, her king, her prisoner.

Scarlet is the second novel in the Lunar Chronicles, the first one being Cinder, which I really loved, so the bar was set quite high for this one! For those of you who don’t know; The Lunar Chronicles is a series of fairytale retellings in a science fiction setting. Cinder is based on Cinderella (who would’ve guessed) and Little Red Riding Hood was the inspiration for Scarlet.

Little Red Riding Hood was my favourite fairytale when I was a kid. I vaguely remember my grandparents having the story in a little book somewhere in a drawer, and I used to read it over and over again. This is a very vague memory, though, so my parents (who’ll definitely be reading this — hi mum, hi dad!) might have no clue what I’m one about. Anyway, it was my favourite, so it was a lot of fun for me to read a retelling of it.

I loved Scarlet right from the beginning — like Cinder, she’s a very independent character, but she’s also much more fierce than Cinder was at the start of her book. Scarlet knows how to fend for herself and isn’t afraid to point her gun at someone when she feels she needs to. She’s also extremely stubborn, though, which can be frustrating, but that makes her all the more likeable in my opinion.

Her relationship with Wolf is one of my favourite things about this book. They’re inevitably drawn to each other, but they both know they shouldn’t be — for very different reasons, which I’m not going to say anything else about because of spoilers. There’s just something very special between them, and I loved seeing how that developed throughout the story.

Of course, we also get to see how things are now with Cinder, but she is no longer the focus of the story. It’s clearly more about Scarlet now, who definitely gets the most chapters throughout the book. At first, I kept thinking “yeah, alright, great, but I want to know what’s up with Cinder”, but near the end Scarlet’s storyline had me so wrapped up that I just wanted to keep reading about her.

Both stories were amazing, though! It was fun to see how Cinder has evolved as a character since the start of the first book, since she has been through a lot and has definitely had to adapt. I loved her travel companion, Thorne, as well, as he’s just like a wonderful breath of fresh air with all his light-hearted banter in between all of the seriousness. Definitely a new favourite character, as well.

Lastly, I want to mention the fact that things get pretty dark with this story, which I was very impressed with. While Cinder incorporated some rather serious (political) issues, things are taken to the next level with Scarlet. I really felt for Prince (or, well, Emperor, now) Kai, since he has a lot on his plate in this book. Plus, he has no idea what’s going on with Cinder and the rest, which was really frustrating! I liked that we were kept in the loop about his life, though.

I really love this series, and I can’t wait to read Cress, the third book (based on Rapunzel). I want to know what happens next!

12 thoughts on “Scarlet by Marissa Meyer”