A few weeks ago, my favourite biscuits were on sale at the supermarket: cinnamon biscuits by a brand called Verkade (not sponsored, although I wish I was). They’re crunchy and sugary and cinnamony – they’re delicious. I don’t often buy cookies or biscuits at the supermarket, because I always figure they’ll be better if I make them myself, anyway. That’s just a fact – home made always tastes better than store bought.

However, these kaneelbiscuitjes (as they are called in Dutch) are among the few cookies I am actually more than happy to buy. I can munch on them all day. Which is exactly what I was doing (probably while watching Friends or New Girl) when I came up with the idea to try and make these cinnamon biscuits myself, to see if they would actually be even more delicious.

Cut to this weekend. I’d put together my recipe, put on some Dire Straits, and got to work on the dough. At one point I was afraid it wouldn’t come together, but I added a little bit of milk and kneaded the dough with my hands and it turned out beautifully. This was the second time I used the slice and bake method (rolling the dough into a log and then slicing it into cookies), and because I actually let the dough cool for plenty of time this time around, it worked perfectly!

These crispy cinnamon biscuits go really well with a nice cup of tea, or just as a snack whenever you feel like it. I’d definitely recommend giving them a try. Oh, and they’re definitely better than the supermarket biscuits.

1. Beat butter and 80 g of sugar together Take a large bowl, and beat together the softened butter and the 80 g of sugar (do not put in the other 30 g!). I used a handheld electric mixer with dough hooks for this. Continue beating until it’s pale and creamy.

2. Add egg yolk and vanilla extract Separate an egg, add the yolk to the butter mixture and put the egg white aside (you can use it for a different recipe, like macarons, or throw it away). Mix the yolk through the mixture. Also add the vanilla extract, and mix again.

4. Add dry mixture to wet mixture and beat – add milk Now, add the flour mixture to the butter mixture and mix it together with your electric mixer. The dough will not come together right away. I added a tablespoon of milk at this point and that did help! If you don’t have any milk, or don’t want to add it to your cookies, I think you can leave it out as well. Your dough will just be a little drier.

5. Knead dough into log, wrap in clingfilm and chill in fridge for 2 hours Keep mixing the dough until lumps start to form. Now, put your mixer aside, and knead the dough together with your (clean!) hands. It will form into a ball easily. Shape it into a log, wrap it in clingfilm and put the dough in the fridge to chill for two hours.

6. Make cinnamon sugar While your dough is chilling in the fridge, take out the remaining 30 g of sugar and 1 teaspoon of cinnamon, and put them together in a small bowl. Mix it together until the sugar and cinnamon are evenly mixed and the sugar has turned slightly brown.

7. Slice chilled dough log into 20 discs Once the 2 hours are over, take your log of dough out of the fridge, and take off the clingfilm. Slice the log into about 20 discs, or biscuits to be, and put them on your baking tray (which you’ve covered with parchment paper). The discs need to be about half a centimeter, or slightly bigger.

8. Cover biscuits in cinnamon sugar Spoon a little bit of cinnamon sugar on each biscuit, and spread it over the disc with the back of a spoon. This way, you’ll press the sugar into the dough, which will make it stick.

9. Bake for 20 minutes Once all of your biscuits are covered, put the baking tray into the oven and bake the biscuits for 18 minutes at 180 °C. or until they’ve turned (golden)brown. Once they’re done, take the tray out of the oven and let the biscuits cool on the tray for 10 to 15 minutes. Then, transfer the cookies to a plate (or whatever surface you like) and let them cool down completely.

And that’s it! You’ve got yourself some lovely crispy cinnamon biscuits that go wonderfully with a nice of cup tea! 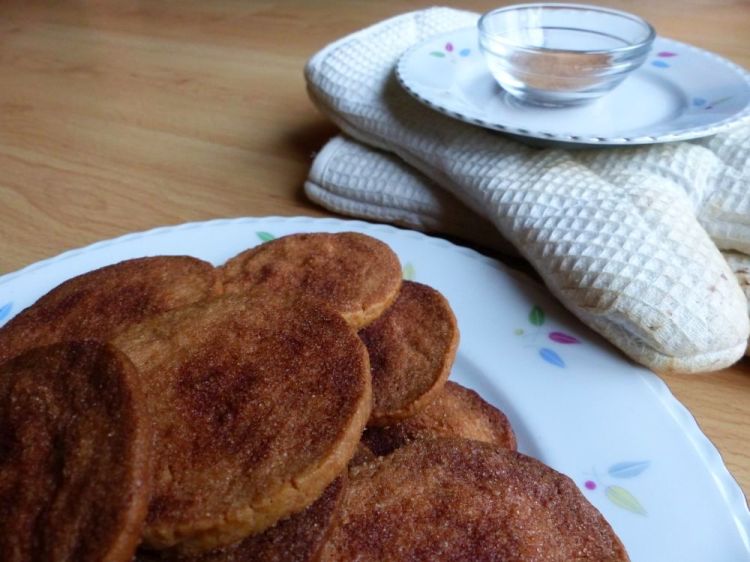