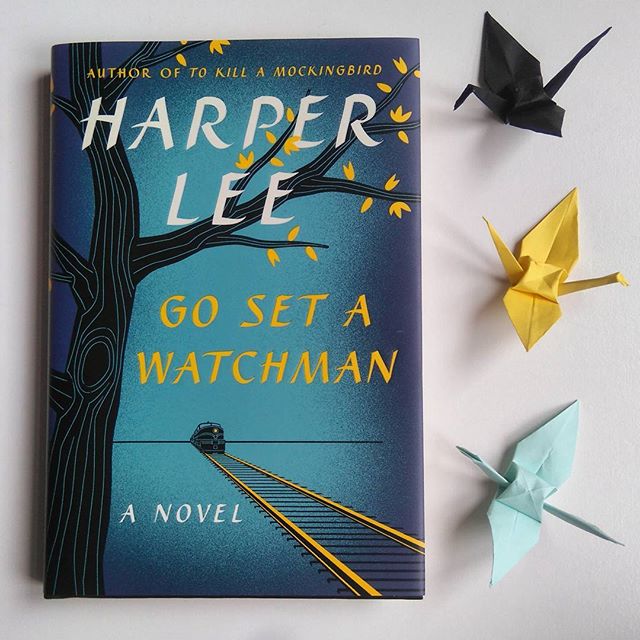 A while back me and my friend Emmie from Another Night of Reading decided to do a buddy read of Go Set a Watchman by Harper Lee since we both wanted to read it soonish and we’d also like someone to discuss it with because of its special nature and all the controversy and stuff. We set a deadline and date to discuss it together (August 16) and started reading.

Turns out we both have lots of thoughts. They’re mostly along the same lines, but Emmie’s focus was on slightly different things than mine – her post will be up in a couple of days, and I’ll add a link to it here.

For now, let’s get on with this (slightly lengthy) post.

So, first of all, I think this book should never have been published. That’s not meant in a mean-spirited “this book is bad – why was it published” kind of way, just to be clear. It is meant in a “Harper Lee did not want this manuscript to be published so therefore it shouldn’t have been” kind of way. If you don’t know about this controversy, this New York Times article written by Joe Nocera explains it very well, I think. It was written over a year ago, before Harper Lee passed away, but it sums up the problems with this publication perfectly. A quote to quickly summarise the issue:

The Ur-fact about Harper Lee is that after publishing her beloved novel, “To Kill a Mockingbird,” in 1960, she not only never published another book; for most of that time she insisted she never would. Until now, that is, when she’s 89, a frail, hearing- and sight-impaired stroke victim living in a nursing home. Perhaps just as important, her sister Alice, Lee’s longtime protector, passed away last November. Her new protector, Tonja Carter, who had worked in Alice Lee’s law office, is the one who brought the “new novel” to HarperCollins’s attention, claiming, conveniently, to have found it shortly before Alice died.

An even more concise summary: it’s all fishy as hell.

I was aware that Go Set a Watchman is a first draft of To Kill a Mockingbird before going into it, and, quite frankly, I think it’s a disgrace that it has been marketed as a full-fledged sequel. It clearly isn’t. After discussing it, Emmie and I came to the conclusion that this is not a whole novel – it’s a collection of fragments of what could become a good novel and what did, in fact, become a masterpiece in To Kill a Mockingbird (in my humble opinion).

This is not to say that I didn’t enjoy reading Go Set a Watchman, because I did, but I think this was mainly because I read it with my literature student hat on. I approached it as a first draft, and constantly compared it to To Kill a Mockingbird in my head, trying to figure out how events in GSAW lead to the final version of TKAM. It’s a weird timeline – GSAW was written before TKAM but the events are supposed to take place after TKAM, and TKAM was never meant as a prequel. Another reason why treating GSAW as a sequel doesn’t work, as this example by Nocera clearly illustrates:

[S]he took a character who was a racist in the first draft and turned him into the saintly lawyer Atticus Finch who stands up to his town’s bigotry in defending a black man. He becomes the hero of “To Kill a Mockingbird.”

The main thing that struck me, and which I kept thinking about while reading the book, is that where To Kill a Mockingbird is timeless, Go Set a Watchman is very much stuck in its time. When I read TKAM about a year ago, I was startled and amazed by how everything Harper Lee describes is still so extremely relevant. But while the issues at the heart of the matter are essentially the same in GSAW, the story has not stood the test of time. It is focused on what happened at that moment in time, with references to specific events that do not make sense to a modern (non-American) audience without an explanation – an explanation which is not provided. That is my main criticism of this story: it’s too vague. I felt like half the time I did not understand what was going on.

All in all, though, I feel like I don’t really have the right to criticise this as a story at all. Go Set a Watchman was simply a stop on the way to To Kill a Mockingbird, and that turned out to be one hell of a story.

This is just my take on the matter, though. I’d love to hear your thoughts on all this and discuss it in the comments!