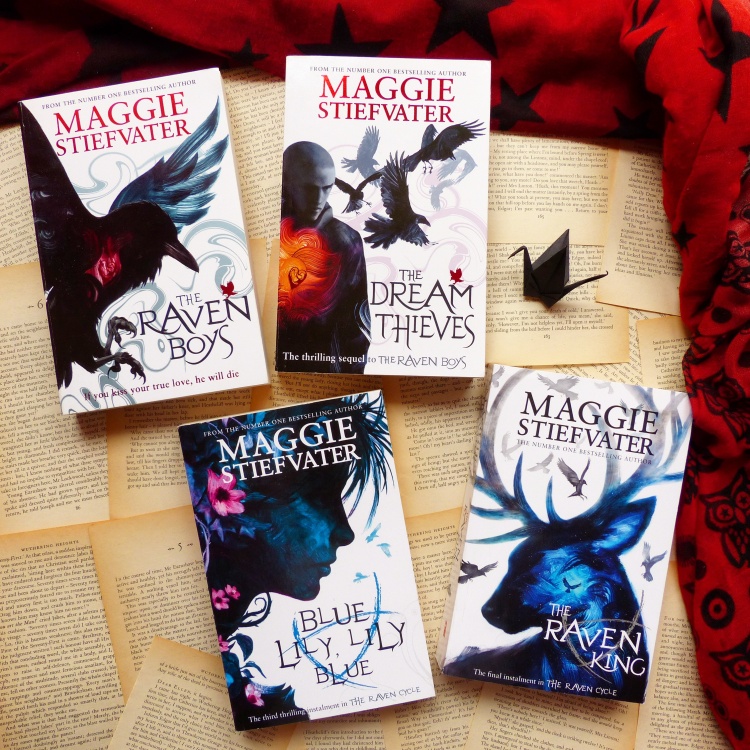 I finally did it, guys. I finished reading The Raven Cycle by Maggie Stiefvater!

Back in the summer of 2016 I read the first two books of the series, The Raven Boys and The Dream Thieves, but then my internship happened and graduating happened and I just didn’t get around to reading the rest of the series, even though I really wanted to.

A while back I decided it’d be a good idea to binge read the entire series. I figured it would be a much better experience to read the entire series without long breaks between the books. Plus, when I read The Dream Thieves I’d already started my internship, so I only read a couple of pages or a few short chapters at a time. Not my favourite way to read a book.

When Bout of Books 19 rolled around a few weeks ago I decided this was my chance! I would start my binge read. I read the first two books during that read-a-thon, and finished Blue Lily, Lily Blue and The Raven King when I was on holiday in France two weeks later.

I figured it be best to do one big review for the entire series, since I read them all in such a short period of time. Plus – it’s much easier for me. That does mean that this post features some spoilers, though, but only for the first book!

I have to say straight off the bat that the first book is my clear favourite. It’s what made me fall in love with the characters, the story, and, let’s be honest, Maggie Stiefvater. She’s very cool indeed.

What I like about The Raven Boys is that the magical elements are still rather subtle. Although I’m not sure if it’s subtle enough to still be able to call it “magical realism” (are there rules for that?) it’s certainly more subtle than “here, have a fantasy novel”. It’s there, but it’s not all or perhaps even the most important thing that’s going on. It has a very particular feel to it, and that changed a bit for me in The Dream Thieves, where magic is much more present. It’s definitely more fantasy-ish and that continues in the last two books. Don’t get me wrong, I love fantasy, but I really liked the slightly more subtle approach in the first book.

Having said that, the magic and also the clairvoyancy stuff was very cool. I absolutely adored Maura, Calla and Persephone and their strangeness and badass-ness. Can I live at 300 Fox Way, please? Although, to be fair, I’d probably go insane in that house. Way too many people. Seems like fun from a distance, though.

My favourite magic-related thing from the story is Ronan and his ability to take stuff out of dreams. Dreams fascinate me, so that was spot on for me and my interests. I would’ve liked to know more about that ability and why he had it, though, but I read somewhere that Maggie Stiefvater is working on a Ronan-book? YES, give it to me! He’s one of the most interesting characters to me and I’d to love dive back into his twisted brain.

I think there are two things that make this series so utterly amazing to me: the characters and the writing. Both are unlike anything I’ve read before. The characters are complex beings and aren’t defined by just one thing, although a lot of attention is payed to how the outside world perceives them, which was very interesting to me. Gansey is the rich boy, Adam is the poor boy, Ronan is the asshole and Blue is the daughter of the psychic. Yet they’re SO much more than that. That becomes even more clear through their interactions with each other. Perhaps that’s my favourite thing about this series: the way these characters interact with one another – I could read ten books about that.

But then, the writing… Wow. It’s magical. I don’t even know how to describe it, really. Maggie Stiefvater has a way of noticing things and describing things in ways that wouldn’t even occur to most people. I’m in awe of it, and I can’t wait to read more of her work.

Although I’m not too sure whether I’m satisfied with the ending, I wasn’t not satisfied with it per se. I think it’d be quite impossible to truly wrap up this story perfectly. Plus, I’d love to have just kept reading to see what else the characters get up to. Perhaps I was just disappointed it was over? A definite possibility.

All in all, I really loved this series. The Dream Thieves and Blue Lily, Lily Blue had me ever so slightly less excited than The Raven Boys, and The Raven King left me wondering about a couple of things, but I would say that The Raven Cycle is definitely one of the best series I’ve ever read. Gold stars all around!

6 thoughts on “That Time I Binge-Read The Raven Cycle”