Back in June 2014, I tried making macarons for the first time, and it didn’t go horribly wrong, but it didn’t go right either. Then in September of 2015 I tried making them again, and my first batch failed miserably, but my second attempt went much better. Still not the way I wanted them, though. In that post I wrote the following:

I hope to make another batch of macarons soon (and not in December 2016…), because it was so much fun to try this again and I’m determined to master the art of French macarons some day…

Anyway. I finally tried making them again. And they still didn’t turn out right. Let’s go through it, shall we? I’ll try not to be too bitter! 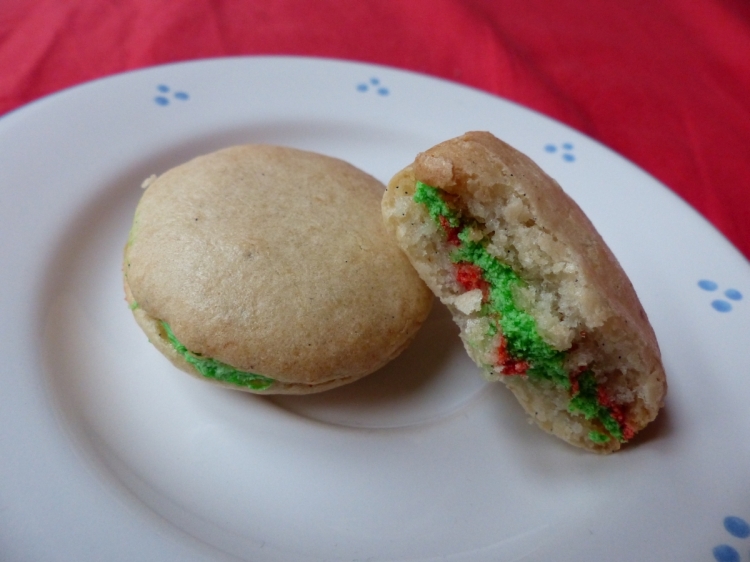 Okay, so these don’t actually look too bad (apart from the hideously coloured buttercream). The shell is smooth and uncracked, and they’re not hollow. Plus, they taste divine. So in that sense these two were a succes.

They’re not perfect, though, and I was looking for perfection.

Let’s start from the beginning! I decided I wanted to make Christmas macarons, the recipe for which would go up later in December (during a little festive project you’ll hear more about later). They were going to be green with red icing. I was all hopeful and chipper when I started making them on Saturday.

So, that was a bit of a bummer.

These were clearly unusable – and I was starting to rethink the green colour as well (it’s quite bright, isn’t it?). I’d already started to make the buttercream for the filling, though, and I was pretty determined about making good macarons, so I decided to try again the next day. I must say, I was a little less hopeful this time.

I think I know what I did wrong both times. I’m pretty sure I undermixed the first time, and turned the oven too hot. I also didn’t let them rest, but the recipe I used (this one by BraveTart) said I didn’t need to.

The second time, I overmixed. I immediately noticed it when I started piping them, so I became less precise because I was irritated. I’d meant to let them rest this time, but I got impatient and put in the first batch straight away. They were actually the ones that came out the best, strangely enough. The second batch (which did rest) came out with hollow shells.

This was the first time I used this recipe (I used this one by FoodNouveau the previous two times) and I’m not sure if I’ll use it again. I’m thinking about going back to the FoodNouveau one the next time I make macarons, which hopefully will be soon.

Yes, that’s right, I want to make them again! After my second ‘failure’ on Sunday, I considered giving up entirely and never going back to macarons again, but since then I’ve gotten over the disappointment and I’m determined to master them! Or at least make them look half way decent.

Have you mastered the art of the macaron? Got any tips for me? Let me know in the comments!

7 thoughts on “The Macaron Saga – Part 3: In Which I Seriously Consider Giving Up Forever”