This week, I set myself the challenge of trying to make the ultimate cookie (although calling it “cookie” seems wrong): the French macaron! I’d never made these before, and I spent quite a few days researching the process and watching many Youtube videos to ensure they would come out at least somewhat decent. All of the macaron gurus I watched said that your first try most likely won’t be completely succesful, but I decided to ignore that and just try the best I can! In the end, I had seven succesful macarons, which tasted pretty decent! 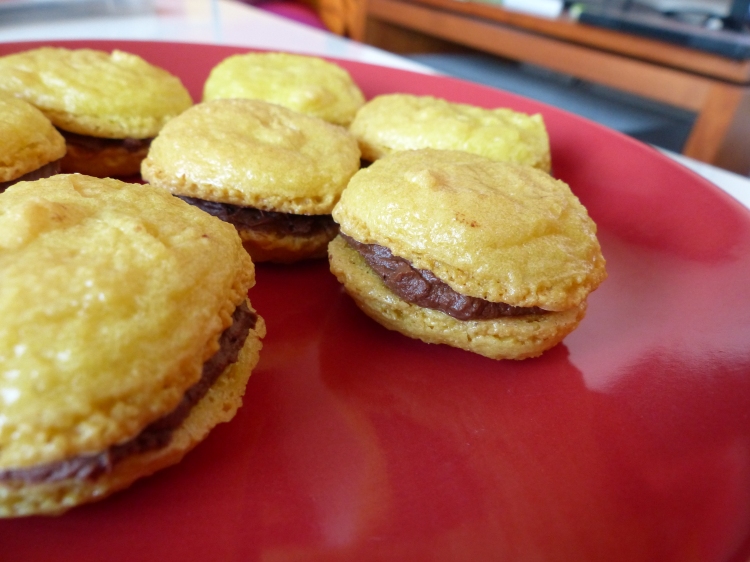 They’re still looking quite lumpy and not entirely the way a macaron should look, but I’m pretty content for a first try. I also think I can pinpoint where things went wrong, so hopefully I’ll be able to improve on this version the next time I make these — which probably will be quite soon, since I’m set on making the perfect macaron!

Of course, I didn’t make my own recipe for this, as that would have gone horribly wrong. Macarons are very finicky and everything has to be just right for them to turn out the way they should. I found a wonderful step-by-step recipe for making macarons at FoodNouveau.com, and they also provided a troubleshooting guide for when things are going awry. Seriously, that guide answers every question you might have about macarons.

So, I’m not going to write out a recipe for this one as the above mentioned was the one I used, and I’m just a beginner when it comes to these delicacies. But just to give you an indication of the recipe, here are the measurements:

– a few drops of food colouring

For the rest of the recipe I would really recommend FoodNouveau!

I am still going to give you my experience with making these little ones, though! I spent the entire afternoon in the kitchen yesterday, and made a few pictures along the way as well. 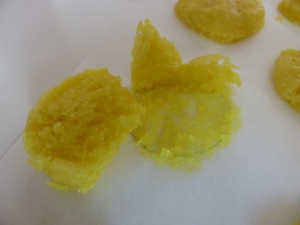 Since my oven is quite small, I had to bake my macarons in two batches, which was a good thing in the end since the first batch failed miserably. They were undercooked, and by the time I realised that it was too late to put them back in the oven. The macarons wouldn’t come off the parchment paper — at least, not in one piece. Therefore, these ended up in the bin, unfortunately.

So, I knew what  I had to do for the second batch: simply bake them longer and not take them out until they felt firm when touching them. At this point, I was also a little more sure about how to place the macaron batter in nice round circles on the baking sheet.

Some of them are still a bit, well, not round, but most of them are looking pretty good at this point! I was quite chuffed with myself, to be completely honest, and had high hopes for this second batch.

I put them in the oven and noticed to my excitement that they were starting to form the little feet (or ridges) at the bottom of the macaron. That’s when you know it’s going well! However, they had a bit of trouble with getting cooked completely, as they stayed a bit squishy and soft even after about 20 minutes.

In the end, I decided I had to take them out as they were starting to turn a bit golden brown as well — which is not what you want. They lost some of their bright yellow colour but I didn’t mind since that was an accident in itself as well — I put in little bit too much food colouring. Still though, I think they turned out pretty nice, and I’m still really happy with those little feet.

For the filling of the macarons I made some chocolate ganache. I used 100 g dark chocolate and 125 g whipped cream, which I then melted au bain marie style, and mixed together with an electric mixer. I had way too much ganache for the 7 macarons I ended up with in the end, so I still have to figure out what I’m going to do with the rest of this stuff, but that’ll be alright.

Well, that is basically my macaron story. Hopefully, in the future, I can provide you with a more helpful guide on these cookies, but this is my experience with it so far! They tasted pretty good, and turned out quite well, aside from the conventional aesthetic aspect. My friends enjoyed these lovelies very much, so there you go — that’s the most important part in the end, I think!

Have you ever managed to make the perfect macaron? 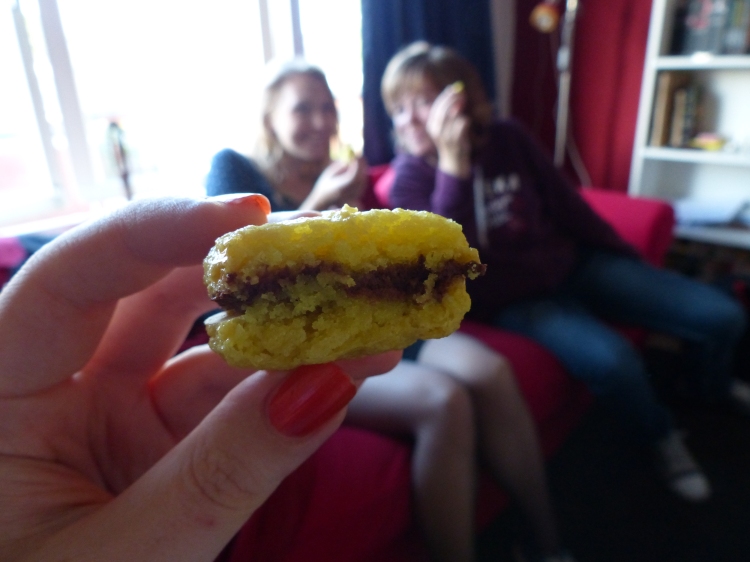 9 thoughts on “My First Try At French Macarons”