Back in November 2017, I wrote one of these What I’ve Been Up To posts telling you all about the novel I was going to write. My plan was to outline it during NaNoWriMo that month and then to start writing it afterward. Here’s what I said:

I’m feeling pretty good about it! The plan is to start writing it in December, or January, depending on how busy December is.

I didn’t finish outlining my novel in November 2017 and I definitely didn’t start writing it that December. I started writing some of it in 2018, but I didn’t get very far. So, at the start of 2019, I vowed that that would be the year that I would finish writing my novel – the first draft, at least.

And I did! I wrote (the majority of) a novel last year and I couldn’t be more proud of finishing my story.

As I said, I’ve mentioned this novel a couple of times already on my blog, and several people have asked me to talk some more about the story as well as my writing process. To be honest, I’m not entirely sure if I have that much to say that’s actually interesting, but we’ll see. 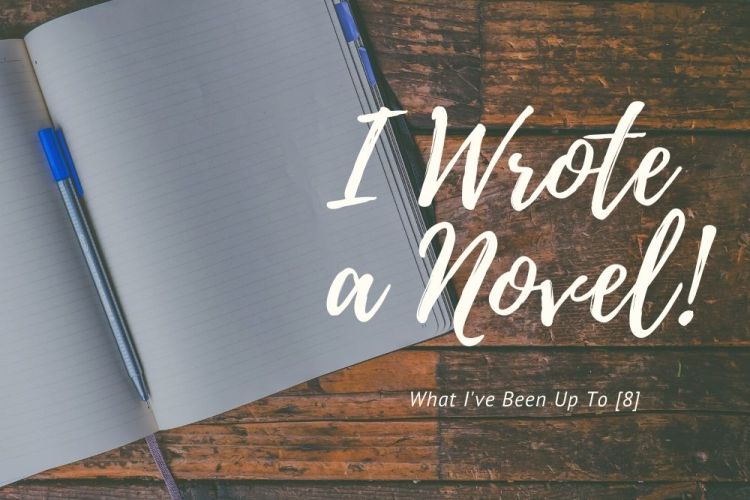 The current title of my novel is Of Life and Dreams. I’m not sure yet if it’s going to be called that when I’m done with my final draft, but I have grown quite fond of it, so I can’t imagine me changing it any time soon. Anyway, let’s have a quick summary:

Kat has recently graduated from university and ever since she’s been floundering. Unable to find a job, she starts to worry about the future more and more, which leads to her having nightmares almost every night. Her best friend Lexie and her father urge her to visit a sleep therapist, and, reluctantly, she goes to see Dr Manning, who advises her to keep a dream journal. Without anything else to really devote her attention to, Kat starts to focus entirely on recording her dreams in the journal. Slowly, her dreams start to transform into something different, and Kat starts to lose sight of what’s real and what isn’t, getting increasingly more stuck in her dream world and losing her connection with the real world.

It’s a pretty vague summary, but I haven’t actually written a synopsis yet, so it’s all I’ve got at this point.

So far, a few people have read the story and given their feedback – which was absolutely terrifying, but also a very important part of the process. Plus, it was very good for my self-confidence to have people telling me they liked my story. I was very nervous to have other people reading this story because I was so scared they wouldn’t like it or would think it was bad. I’ve been working on it for such a long time now and it’s a story that’s very close to my heart; I’ve been dealing with nightmares for a long time myself, so it was kind of cathartic to write about it in this magical realism-type setting. It provided an escape, but it was also a way for me to process it all.

All in all, it took me over two years to write Of Life and Dreams, but that was with considerable breaks in between. There were many months during which I didn’t write a single word, and in October 2019 I still had a very long way to go. I decided to carefully outline the chapters I still had to write since that always worked well for me in university when I had to find a way to structure my essays and theses. It turns out that that method works for me when it comes to writing fiction as well. I devoted most of my free time in November and December to finishing the story, but I don’t think I could’ve done it without my outline. Per chapter, I wrote down the main events and thoughts of my main character, using bullet points. It was clear, it was concise – it worked. Also, it meant that after finishing a chapter, I could mark it off with my pink marker, which has always worked well for me, motivation-wise.

I finished writing Of Life and Dreams on the 13th of December, and I haven’t really looked at it since then. I’ve thought about it a lot, and talked about it with friends, but I wanted to let the actual story rest for a while before picking it back up. My plan is to read the entire thing in February, and then start working on the outline for the second draft. I don’t think it’s going to need an entire rewrite, but there are definitely some things that need to be changed or be improved upon. Also, there’s a lot of typos.

And after that? People have asked me what I want to do with the story once it’s done. To be honest; I don’t know yet. I think I’d like to start querying with it, to try and get an agent and maybe get it published. That’s The Dream™, but it’s not one I feel comfortable talking out loud about, for some reason. So, I’m just going to focus on improving the story first, and then we’ll see what happens next!

I was planning for this to be a short post, but as always, I’ve rambled on for quite a long time already. If you’ve made it this far; thanks for being interested! What’s something you’ve been working on for a while? Is there something you wanted to accomplish in 2019? Let me know in the comments and we can chat about it!