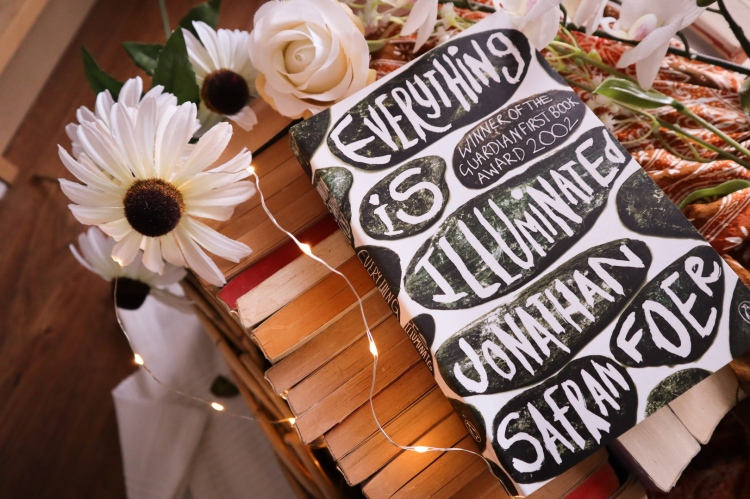 With only a yellowing photograph in hand, a young man — also named Jonathan Safran Foer — sets out to find the woman who may or may not have saved his grandfather from the Nazis. Accompanied by an old man haunted by memories of the war; an amorous dog named Sammy Davis, Junior, Junior; and the unforgettable Alex, a young Ukrainian translator who speaks in a sublimely butchered English, Jonathan is led on a quixotic journey over a devastated landscape and into an unexpected past.

I joined Goodreads in October 2013, around the same time I started this blog (jeez, how has it been this long already?). The first book I added to my to-be-read shelf was Everything Is Illuminated by Jonathan Safran Foer. I’d received it as a gift from a friend, and I was determined to read it soon.

Cut to January 2020, and the start of the Backlist Bookathon.

This readathon (which ended on the 15th of February) is designed to make you pick up books that have been on your TBR for a long time. I decided to go all the way and pick up the oldest book on my TBR, Everything Is Illuminated. Finally, after seven years (!) of picking up other books and ignoring this one, I started reading it.

I have to admit I was pretty intimidated by it at this point. Not because of the subject matter, because after all of those years of not reading it, I’d kind of forgotten what it was supposed to be about. All I knew was that at least parts of the story were written in a very peculiar writing style, as if someone used a thesaurus on every other word. Although I wanted to read the book, that kind of style didn’t necessarily appeal to me. It made me scared it was going to take me several months to read the book.

However, it only took me about two weeks to read it, and afterwards I was so happy to finally have read it. I felt so accomplished! Also, I was pretty glad I ended up loving the book, because when I started reading it, I wasn’t so sure that was going to happen.

In fact, for a while there, this promised to be a pretty disappointing experience. I was sort of right to dread the writing style because that is what caused me to have a hard time really getting into the story. For the first 150 pages or so, reading this felt like a bit of a chore. The only parts I really enjoyed were the chapters set in the past (as far back as the 18th century). Those chapters were written beautifully and they sucked me in. However, I didn’t enjoy the chapters written from the point of view of Alex, the Ukrainian translator. They felt a bit too gimmicky and the writing style made it difficult for me to connect with Alex as a narrator. To be honest, the only reason I didn’t put down this book within the first 100 pages was that I had waited seven years and I wanted to stick it out.

I’m so glad I did stick it out because, boy, did I get reeled into this story. By the end of the book, I loved Alex with all my heart. In the beginning, my problem was that I wasn’t invested in any of the storylines, but it’s kind of astonishing how that changed. Jonathan’s search for his family’s past, Alex’s troubles with his family, and his grandfather’s struggles with his own past… They all made this much more than ‘simply’ another Holocaust novel.

The Holocaust does play an important part, and it does so in a way that made my heart break all over again for what happened during the Second World War. It’s so poignant and harrowing and it doesn’t shy away from describing the cruelty. But this story is also funny, heartwarming and sometimes even bordering on magical. The chapters from the past are still my favourites; they are very masterfully crafted and tell beautiful tales. At first, they seemed very separate from the rest of the story, but in the end, I did see all of the different parts belonged to one whole, which made it all the more satisfying.

Reading this book was such a roller coaster, but I’m very happy I finally read it. Not just because it feels like an accomplishment to have read the oldest book on my TBR, but also because it’s a truly beautiful novel that makes me feel richer for having read it.

One thought on “Reading the Oldest Book on My TBR: Everything Is Illuminated”