In my previous post I talked about some of the things I’ve wanted to bake for a while, but haven’t yet. Today, I decided to change that – I made meringues!

Or, at least, there was an attempt. And a pretty good one at that, if I do say so myself.

About the title of this post, “Bucket List Baking”: I’m thinking about creating a page on my blog with a list of all the stuff I still want to bake, mostly for my own reference. I keep thinking of more and more baked goodies I’ve been wanting to bake for ages (yesterday I thought of cinnamon buns and donuts, for example), and this would be a good way to keep track of it. Or maybe I’ll just set up such a list in my bullet journal, who knows. We’ll see!

First, let’s get back to the meringues. 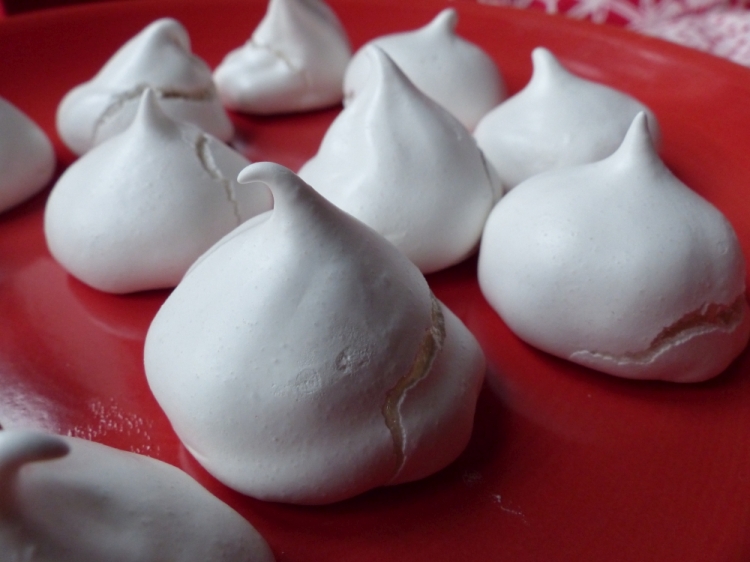 I pretty much used this recipe by CupcakeJemma, minus the fancy colours and the marshmallow in the middle. The recipe states that you need to weigh your egg whites, and then use double that amount in sugar. So, my recipe was like this:

And then begins the beating, which made me remember I really want a stand mixer. I only have a handheld mixer, and while that worked alright, it’s pretty tedious nonetheless. Plus, I’m pretty sure the thing got overheated near the end.

The advice for baking meringues is to first make sure all of your equipment is completely grease-free, otherwise your meringue won’t whip up enough and you won’t get the stiff peaks that you need.

I was really careful, but apparently I still did something wrong because in no way could I whip the meringue into stiff peaks. They stayed at the soft peaks level, unfortunately. Perhaps my equipment did have some grease on it, or there a bit of egg yolk got stuck in the whites or maybe it was the humid weather. Not even kidding – that could have been the problem.

Either way, the meringues didn’t exactly turn out as they should, but I baked them anway for about 35 minutes on 100 °C. The piping was a bit of a mess, though. I was too impatient with transferring the meringue into the piping bag and it ended up getting everywhere – mainly all over my hands.

After the meringues had been in the oven for about 10 minutes I already noticed that they’d started to crack, which I’m pretty sure was due to the mixture not being stiff enough. Other than that, though, they seemed to be doing pretty well in the oven. Because of the low temperature, they kept their pretty white colour and didn’t brown at all, which I’m really happy with.

Because of the cracks, though, the meringues did have “holes” in them, as in, pockets of air instead of … well, meringue. 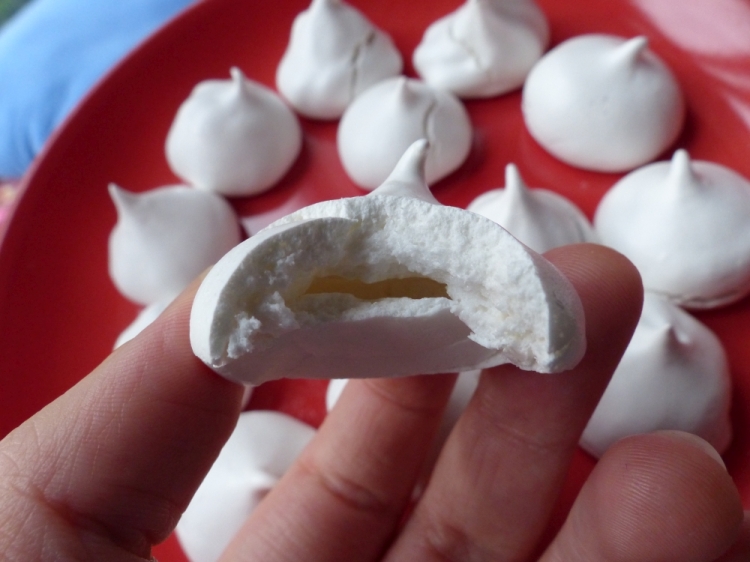 I had never tasted a home made meringue before, so I wasn’t really sure what they were supposed to taste like. Nevertheless, I was quite surprised when the inside turned out to be a bit like marshmallow fluff instead of the crisp and crunchy texture I’d expected, partly because the outside was crunchy.

Despite that, though, when I’ll try to make meringues again, I am going to try to get the real thing. Stiff peaks, no cracks, crispy to the core.