This week’s topic is 10 facts about you – and since I’m great at talking about myself, I decided to join in the fun! This post turned out to be pretty long, so I’ll keep this intro short and will get right to it…

1. I don’t drink coffee. I don’t consider this to be particularly weird or anything since I’m doing great without coffee (or at least okay), but I guess it is a bit strange? So many students claim they “survive on coffee”, but not me! Tea all the way for this one.

2. I can get really riled up about 3D films. I hate them. Up until recently I refused to see films in 3D, but then I figured I should give it another go with Captain America: Civil War, and I sort of survived? But my eyes were exhausted and it didn’t work for me half the time so I was like “yeah, I’d rather not”. And then Finding Dory came out, but only in 3D. What’s that about?! I loved the film (because duh, it’s Finding Dory), but I’m still pretty miffed that 3D is the only option. There are so many people for whom 3D simply doesn’t work and even more who don’t like it.

So, yeah. I think that gives you a pretty good idea of how much I don’t like 3D.

3. I really want a guinea pig or a rabbit. I had guinea pigs and one rabbit as pets when I was younger (up until I was nearly 18) and I love those animals. They’re adorable and fun and sweet. A lot of people don’t get why I like guinea pigs so much, but stuff them. Guinea pigs are cool. Unfortunately, I can’t keep pets in my current apartment and even if I were to look past that (which I never would because I’m a goody-two-shoes) I don’t think it would be very beneficial for the animal itself. So that’s not happening anytime soon.

4. I love playing the Sims – mainly the Sims 2. I started playing it when it came out in 2004 and basically never stopped. Somehow I just can’t seem to get bored of it. I also occasionally play the Sims 3 but it just doesn’t has the same appeal. And then there’s the Sims 4, which I tried for about an hour and then was like “nahhh”.

5. I play the guitar and sing a lot – but rarely in front of people. I started playing the guitar when I was ten (or maybe even a little younger). It all started with the classical Spanish stuff – which was cool but I never really practiced enough. My teacher was really good, though, and I had lessons until I was sixteen or seventeen and needed to focus on my exams, and then I didn’t play for about a year or so. Actually, I’m not really sure how I got back into playing, but I did. I was a bit over the classical stuff, so I started playing pop/rock songs, singing myself, which is when I developed my singing voice. I’ve played in front of people maybe three or four times, which was absolutely nerve-wracking. Mostly I just play and sing in the comfort of my own home and sometimes in front of my friends.

6. I never played Pokémon. This doesn’t seem like a very significant fact, perhaps, but with the whole Pokémon GO craze going on it appears I belong to a minority within my age group. I watched Pokémon on TV and I vaguely remember having a handful of cards but having no clue what to do with them. I don’t plan on playing Pokémon GO either, but I’m having fun watching my friends run all over town, so that’s something. 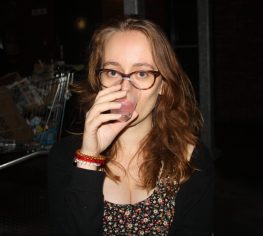 7. I have gained a reputation for always having a drink in my hand (and sipping from it) on pictures. I am not 100 percent sure how this started, but at some point a friend of mine noticed there was a “theme” in pictures of me: I was taking a sip from my drink (probably wine) at the exact moment the photos were taken. I think this happened because I don’t know what to do with myself in pictures – so I just took a sip. At this point there were only two or three pictures like this, but then it became a thing. Now, at pretty much every party there’s at least one picture of me with a glass at my mouth. This one is the most recent example.

8. I don’t wear make up (except lipstick on occasion). Back in high school there was a short period of time when I did wear mascara, some eyeshadow and lip gloss, but then eye make up started giving me a headache and I became too put lazy to take it off at night. I never did the whole full face make up thing with foundation and concealer and powder stuff. It just never seemed necessary, and, again, I’m way too lazy for the whole shebang. A few years ago I started wearing red lipstick every now and then – but that’s it. I feel like maybe it’s more common in the Netherlands to not wear make up, though? I don’t know about this for sure, but that’s the impression I’ve been getting.

9. I’m worth at least 300 camels, according to some guy who offered them to my father in exchange for me. I’m still not sure whether or not this was a joke. Me, my parents and my aunt were in Mali (Western Africa) back in 2007 and we were having dinner somewhere when a guy approached us and started up a conversation with my father about me. He liked me and then he started talking about 300 camels. I think eventually my father jokingly said I was still a bit young (I was 14 at the time). It’s a fun anecdote, though.

10. I was a vegetarian for a month when I was 11. I was on a school trip when our bus passed a truck that was filled with pigs and then me and some friends decided we would become vegetarians. I think only one of us managed to actually stick with it – although I haven’t spoken to any of them in over 10 years, so who knows what they’re up to these days. Sometimes I think about trying to go vegetarian again…

So, now you know all those new things about me, tell me something about you! What’s a fun fact about you? Or not fun, those are cool too. Tell me!

18 thoughts on “Top Ten Tuesday: Ten Facts About Me”