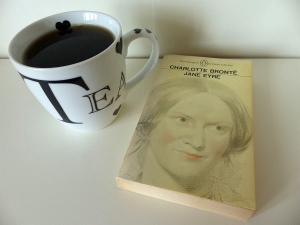 Since its publication in 1847 Jane Eyre has never ceased to be one of the most widely read of English novels. Transmuted by the rare Brontë imagination, the romance of Jane and Rochester takes on a strange and unforgettable atmosphere that lifts it above the level of mere melodrama. But Charlotte Brontë intended more. She portrayed the refusal of a spirited and intelligent woman to accept her appointed place in society with unusual frankness and with a passionate sense of the dignity and needs of her sex.

Jane Eyre by Charlotte Brontë is one of those books that has been on my to read list for years and years. It was just something I never got around to, because there was always something else I felt like reading more. Some of my friends absolutely adore it, though, so I figured it was about time I should give it a go. Since Wuthering Heights, which is written by her sister Emily, is my all time favourite book, I expected that I would like Jane Eyre as well (although that’s of course no guarantee).

Besides never having read the book before, I’ve also never seen a film adaptation, so I went into reading Jane Eyre more or less blind. I knew there was a Mr Rochester, but I didn’t know anything else about the plot, which is quite rare (for me) when it comes to classics like this. It was a really nice experience, though, since that meant this was a completely new book for me.

We get to follow Jane throughout her childhood, which provides a very nice background for everything that comes after. I loved Jane. She’s so sure of what she wants in life, and about what she thinks is right and wrong, and always acts according to that. She seemed very powerful to me, even though her decisions might at times seem quite strange to a modern audience. It is always clear that she does what she does because she thinks it’s right, and that made her into a very admirable character. Her intelligence and frankness only added to that:

“I do not think, sir, you have any right to command me, merely because you are older than I, or because you have seen more of the world than I have; your claim to superiority depends on the use you have made of your time and experience.”

She isn’t afraid to tell people what she thinks, even if that goes against the conventions of the time. I absolutely loved her for that.

I did think there was an awful lot of focus on Jane’s plainness, and on the beauty of others. I have a suspicion that that might have kind of been the point, but it really frustrated me. Characters were described by their outward appearance time and again, and their value as a person completely depended on their physical features. Even Jane herself displayed this kind of thinking and that annoyed me.

What I did really like was the fact that Jane becomes quite independent after leaving Thornfield Hall, when she’s working as a school mistress. Although I really enjoyed that she goes out on her own for a while, part of this storyline felt a bit redundant to me. The whole “marry me so we can be missionaries together” thing was very unnecessary, although it did once more show Jane’s firm beliefs and her ability to withstand pressure.

Overall, I was really impressed with Jane Eyre, and particularly with the portrayal of Jane as an independent woman. Although Mr Rochester was a bit of a surprising character to me (I’d kind of expected another Mr Darcy), I found him to be a very interesting character as well. They’re a fascinating couple, and I thought the ending of the book was quite satisfying. I’d definitely recommend giving Jane Eyre a try to people who enjoy fiction from this time period.