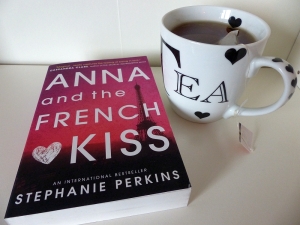 Anna had everything figured out — she was about to start senior year with her best friend, she had a great weekend job, and her huge work crush looked as if it might finally be going somewhere… Until her dad decided to send her 4383 miles away to Paris. On her own.

But despite not speaking a word of French, Anna finds herself making new friends, including Étienne St. Clair, the smart, beautiful boy from the floor above. But he’s taken — and Anna might be too. Will a year of romantic near-misses end with the French kiss she’s been waiting for?

One of the first things I found out when I started book blogging was that everyone and their mother seems to love Anna and the French Kiss by Stephanie Perkins. I was kind of surprised about this, to be honest, because to me it didn’t really seem like a book everyone would love that much. I figured I should read it myself to find out what all the fuss was about, and I finally did that a few weeks ago.

Honestly, when I first started reading one of the first things I thought was: “I am too old for this” (coming from a twenty-one-year-old, I know). The first person narration combined with the whole “reluctant teenage girl gets sent off to boarding school in “exotic” foreign country but ends up falling in love”-thing seemed like a bit of a cliché to me which I might have enjoyed when I was fifteen but am kind of over now.

But then I couldn’t stop reading and finished the book within two days.

I loved this book. I just could not put it down. Frustratingly enough, I cannot put my finger on the why of this, though. The plot isn’t exceptional or original — in fact, it is quite cheesy. However, that didn’t matter at all. The way the story is written has something special about it, something that kind of made me fall in love with it.

The entire story is told through the eyes of Anna, and she is a wonderful narrator, particularly so because she is flawed. She could be quite annoying and whiny (like when she’s terribly afraid she’ll look too American in Paris), but that’s what made her such a good character, I think; she’s not perfect. Another thing I liked about Anna is that she has a huge passion for films, and writing about them on her website. That’s pretty cool! I love it when characters have hobbies.

I also loved Anna’s group of friends in Paris, and (of course) especially St Clair. That boy. It was kind of frustrating to see Anna and St Clair dance around each other for so long, but that’s also what kept me turning those pages. Their relationship is so adorable and I adored the scenes between them two. I think that’s what made the novel for me: the conversations between everybody seemed so real.

In the end, I still don’t entirely comprehend why this novel is such a big hit, even though it has enchanted me as well. I’m looking forward to reading Lola and the Boy Next Door and Isla and the Happily Ever After. Let’s see if Perkins can keep up the adorableness!

10 thoughts on “Anna and the French Kiss by Stephanie Perkins”

Join 3,018 other followers
Follow Books Baking and Blogging on WordPress.com