Last month, I told you about the great reading month I had, but April has been even better! I took part in the O.W.L.s Magical Readathon, which is a readathon based on Harry Potter and the exams the students at Hogwarts have to sit. Basically, for every one of the twelve subjects you can take at Hogwarts, there’s a prompt that fits with it. I managed to read eight books in April, which means I passed eight of the exams for my O.W.L.s. So, without further ado, let’s get into my reviews of the books!

Heartburn has been on my TBR for a while now, and I was excited to finally pick it up during the readathon. It’s a short novel about a woman who finds out her husband is in love with another woman when she’s seven months pregnant. The novel deals with her grief about her marriage, making a lot of jokes on the way. Ephron knows how to make a comedy out of a tragedy, which should’ve been an impressive feat, but for me, it fell kind of flat. I love Ephron as a filmmaker (Julie & Julia is one of my favourite films), but Heartburn, her only novel, didn’t do it for me, unfortunately. It was an entertaining read, but it stayed rather too much on the surface for my tastes, and felt very outdated (bordering on racist). 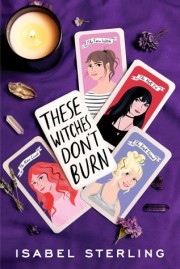 This novel was such a wonderful surprise! I figured it would be a fun, quick, three-star read that wouldn’t be very memorable – and it was definitely fun and quick, but it also completely drew me in. These Witches Don’t Burn is set in contemporary Salem, Massachusetts, only in this version, witches do exist. Our main character (and witch) Hannah is trying to get over her ex-girlfriend, but she has a bigger problem on her hands when witches in town are being targeted and hurt. This novel is exciting and I liked the mystery aspect (although it wasn’t always very mysterious). I was on the edge of my seat the entire time, and the book also unexpectedly packed an emotional punch. I can’t wait for the sequel! 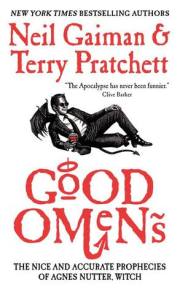 Good Omens is on my list of 10 books I want to have read by the end of the year, and the main reason for that is that I wanted to watch the TV series featuring David Tennant and Michael Sheen. I’ve now read the book and seen the TV series and can tell you that I prefer the series. The book wasn’t bad by any means, but I think the series is absolutely brilliant. This story, about the end of the world and an angel and demon working together to prevent it from happening, is very well suited for the small screen. In book form, it felt a little too scattered, and I wasn’t able to get fully invested in the characters and the story. It’s very funny, though, and I loved how it highlighted how awful humanity can be, while remaining tongue-in-cheek about it. I had a good time reading this and I can see why so many people love it so much.

Love and Other Words by Christina Lauren ★★★★☆

This is the third Christina Lauren novel I’ve read (after Autoboyograhpy and The Unhoneymooners) and I definitely want to read some more! Love and Other Words tells the story of Macy and Elliot, who were childhood friends and high school sweethearts, but haven’t seen each other for eleven years when they meet again at the start of the novel. Alternating between the present-day storyline and flashbacks, we find out how they met and fell in love and what happened to break them apart. This novel fully drew me in, and I was entirely invested in the characters and their romance, but the ending felt too dramatic for me, with dialogue that was a bit too clichéd for my tastes. Unfortunately, that took me out of the story a little, but the journey towards the end was wonderful!

This is a little different from what I usually read, but it was definitely interesting. In a number of theses, the authors of this manifesto plead for a type of feminism that helps all women – not just the Hilary Clintons and Sheryl Sandbergs of the world. It argues that the world is in a crisis of capitalism and that we need a new system if we want to make sure the 99 percent, both women and other, are treated better. I thought this manifesto was very informative and as a feminist myself, I agreed with many of the points it laid out. I did keep wondering, however, if women would really be or have been better off without capitalism. If not capitalism, what else? A true solution is never really proposed. Nevertheless, I highly recommend reading this if you’re interested in intersectional feminism.

I actually wrote a full review on Circe a few days ago, so you can read that here, if you’re interested – I had so many thoughts on this book that I can’t possibly fit them all in a mini review. There’s been a lot of hype surrounding Circe, which is part of the reason why I was so curious to read it and I’m very happy to say that this novel did not disappoint in the slightest. If you like anything to do with Greek mythology and strong female characters, I highly recommend giving this novel a go. Circe is one of my favourite characters in a long time, and I love how Madeline Miller turned a Greek myth into a powerful story about womanhood and female rage. The writing is also absolutely wonderful and I adored the descriptions of nature in this novel. A convincing five-star read!

In May, I’m reading a novel that’s based on A Midsummer Night’s Dream, or at the very least features some of its characters, so that seemed like a good reason to reread the original play. I read it once in university, and enjoyed it then, but didn’t remember it that clearly. This time, I read it while simultaneously listening to a full cast audiobook version, which was a very enjoyable experience. However, I’m just not the biggest Shakespeare fan: I don’t have anything against his works, and I appreciate everything he’s done for literature and language in general, but I simply don’t get that excited about his plays. It was definitely fun to reread this, though, and I might read some more of Shakespeare’s comedies in the future. 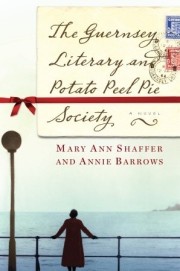 This was also a reread and such a wonderful one! I first read The Guernsey Literary and Potato Peel Pie Society in 2018, when the film was about to come out and I absolutely loved it then, but I think I might’ve loved it even more the second time around. This is an epistolary novel set just after the Second World War. It’s about a London-based writer called Juliet Ashton, who, through sheer coincidence, comes into contact with the members of a book club on Guernsey. They start corresponding about books and life after the war, and beautiful friendships starts to blossom. This novel is a heartfelt story about friendship and the love of books bringing people together, but it also provides a devastating look at life after the Occupation. It’s one of my favourite novels and I can’t wait to reread it – again.

And those were all the books I read in April! I had a great reading month, but I’d love hear from you as well. What was your favourite (or least favourite) book of the month? Let me know in the comments so we can chat about it!